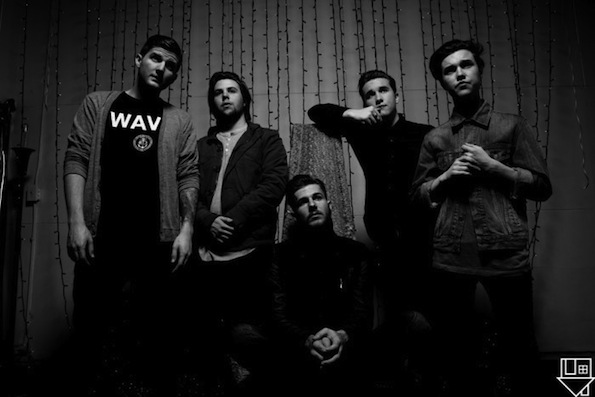 They may actually just take your breath away as “Sweater Weather” warns. Just don’t get your high-waisted shorts in a ruffle.

The Neighbourhood—those beat-riding pop-nouveaus from casual southern California—manipulate hip-hop worthy rhythmatic elements for pop”s sake on this year”s I Love You. Playing shows at festivals most bands twice their age are still struggling to book, The Neighbourhood has smirked and swagged their way to some of this summer”s most prestigious stages, from Coachella to SXSW (and more to be announced).

Currently on tour, and playing alongside the likes of Foals, Surfer Blood, and Atlas Genius, The Neighbourhood is seizing the attention of alt-centric radio stations and magazines—and The Owl Mag is not immune.

Before their first show at San Francisco”s legenday Fillmore, The Neighbourhood sat down in their tiny green room with The Owl to talk their new album I Love You, monochromatics, and fucking Adam Levine comparisons.

The Owl Mag: You put together a lot of influences together in your music. How are you able to mesh all these sounds together so gracefully? It’s really hard to do.

Bryan Sammis: I guess it started out with these three. [Jesse] had a real hip-hop background. I like to also say that if they had to be categorized, then Jeremy would be like the cowboy and Zach would be the scientist.

Sammis: It works really well together. And I think now that me and Mikey are on board, we’re playing a solid backbone to it all.

Abels: I think we all find common ground in not popping something [really different]? Like not wanting to do something else. I mean, we pull from [other sounds] to bring them to the table.

Jesse Rutherford: Well, we pull from what we already know. We don’t go looking for something new to know to take from. We take what we already have in our brains and don’t listen to anything, but just put it together naturally. We look to each other. They influence me just as much as I influence them. But not other artists. The Owl Mag: So what’s the process of songwriting like for you guys?

Abels: We’ll go to Jesse’s house and he’ll bring out this recording program that we use. And, he’ll make up fake drums on it and we’ll just start recording. One of us will have an idea and we’ll just build from that.

The Owl Mag: Is that you coming from your hip-hop background, Jesse?

Rutherford: Yeah, I make beats. That’s what I like to do.

Sammis: We’ve got a lot of cooks in the kitchen when it comes to drums. Because Mikey plays drums, he used to play drums, I play drums—it’s cool though, it’s good.

The Owl Mag: Yeah definitely. It’s a distinct quality to your music here.

Rutherford: Yeah I think so. I think the drums really are a big thing that make our sound. The Owl Mag: Alright, ok. I want to ask you about the album in a bit here but first let’s talk aesthetics. You all are wearing black and white. Like, it’s a thing. It’s a very distinct presence. What was the thought process behind that?

Rutherford: It was kind of just something that came up. I’m always into having a master plan or a master vision. I’ve done that with everything in my life. Like, if I want to dress a certain way, or if I like a certain t-shirt or something—I think we all kind of do this—if you like the certain way a pair of jeans fits, you’ll go out and get those in every color. You know? Because you know those jeans fit you fucking rad. You just keep rocking those same jeans. And that’s kinda how we did with the black and white stuff. It came about, and we were like, “black and white is dope.” And I was like, “let’s do this forever.” In the beginning, it was kind of, “yeah, I love it, it’s really great for us,” and then after a few months, it was kind of like, “maybe we can play with color.” But then we were having a meeting one day and we just kinda decided we’re gonna keep it [black and white].

Sammis: It has evolved though. At first it was us coming from our houses—it was hard for us to only find black and white clothing, you know? So our aesthetic in person has evolved. I think it always will.

The Owl Mag: It’s funny—monochrome is so basic, but your music is really the opposite. There’s so many different sonic colors happening in the sound.

Rutherford: What color would you say we are?

The Owl Mag: You are…a rainbow. A rainbow with sparkles.

The Owl Mag: Alright, so your videos have got the monochromatic elements going for them too, as well as some retro nods: the “50s housewife and on “Sweater Weather” there’s the car…

The Owl Mag: It’s not on purpose?

Sammis: No. Especially with “Sweater Weather.” It wasn’t on purpose. Nothing to me really, except for the car that was the ’69 Mercedes, and the fact that some of us kind of had old school greaser haircuts—none of that was really retro to me, but I guess that in itself just kinda makes it seem…

Rutherford: I think it’s cool that that’s the vibe you get though, because when we go through the video process, our thought process is always like let’s make this timeless. Let’s make it not seem like it’s from the “50s [necessarily], but also like it’s not from 2013. Let’s make it look like when you watch it in 2030 you’re like, oh yeah, this is just a solid black and white thing that’s timeless. It could be from the “90s, it could be from the “50s.

Abels: Well the perfect housewife is very “50s-esque, you know, it has that feel to it?

Rutherford: I guess, but it’s such a modern song though. The Owl Mag: Hmm. Yeah, ok. Just a thought. So you guys are a young band. I’m sure you guys get a lot of age-related questions. Do you feel like people misjudge you?

The Owl Mag: How so?

Mikey Margott: They put us in a boy band role.

The Owl Mag: We read that interview in The Guardian [UK newspaper]. It was kind of weird—a lot of like backhanded compliments, comparisons to Maroon 5…

The Owl Mag: Yeah, I didn’t get that [Maroon 5 comparison] at all.

Abels: Yeah, not at all.

Freedman: Well, besides the fact that you [Jesse] make pop melodies.

Rutherford: Well, and we make pop music too. The Owl Mag: Yeah. I think it was more of a visual thing. Jesse’s the hot tattooed frontman, very Adam-Levine-esque.

Rutherford: Yeah, that’s so silly to me though. Like first of all, we’re in 2013, and there’s a lot of people—well, I guess there’s not too many pop vocalists who are doing that. I guess if anything, to be compared to someone who’s fucking giant, in a band like that, in a popular band—it’s funny to me. It’s flattering. Like, that’s the only person to really compare me to? Because I look a certain way? It’s funny.

Rutherford: I mean, I’d rather [us] be compared to One Direction than Maroon 5 so…

Sammis: I feel like with the age thing, it’s definitely more about the way we look. We get those comparisons. But I guess with the age thing, the only thing is people think we’re not seasoned. I mean, we show up places and a lot of the people who work in the venues have been there for like, 30, 40 years and these kids show up who are 19-22 and they kinda look down on us. Like you’re fresh out of the house, doing this for the first time?

Rutherford: Well for a while…

Sammis: Yeah, we are.

Rutherford: But that doesn’t diminish the music that we make. Because I remember somebody once was like, “oh, you guys are so much younger than I thought.” It’s not to say we haven’t been blessed—I mean, look at this, it’s incredible, we’re moving really fast—but, I think there are some things that people have kept us from because we’re young. There are certain opportunities we haven’t been able to make happen because people think we’re kids. It’s like, who the fuck cares?

The Owl Mag: So what can we as fans expect from the new album?

Sammis: As a band, we’ve grown. We’ve learned to write better and try new things on the album. I think it’s definitely us, but there are definitely some new things. It’s definitely a bigger production, because we have the time and the means to do it but…

Rutherford: I think to people it won’t be anything new. We know how we write and everything, and all that. Honestly I think we put together an album that’s like—I think we nailed it, as far as what people liked and what we had been putting out. I think it’s exactly what they’re expecting to hear. I’d say…

Sammis: I mean from a musician”s standpoint. I’m too caught up in it to realize…

The Owl Mag: Does it feel like a debut album?

The Owl Mag: Like you’re going to take the world by storm? The Owl Mag: Ok, we have time for one last question. Do you have any awesome tour stories?

Sammis: We don’t even have a good answer for that one.

The Owl Mag: Whaaaat? You guys are young ragamuffins, you haven’t gotten into any trouble?

Rutherford: There are some good stories, but I don’t know. There’s been some times when we’ve been scared out of our minds. Remember when the back door to our van opened?

Sammis: Oh yeah, that was bad. In Boston, the back door to the van opened, and the roads…

Rutherford: And there were thousands…the scary part was that if [the equipment] would have fallen out, we could have killed people. It would have been awful.

Sammis: Orrrr, smoking in the bathroom?

Rutherford: Hahahaha. We felt badass as hell though. I was…

The Owl Mag: Hahahaha, like shaking the towel at the smoke detector?

[Both Jesse and Alyssa make towel shaking motion while laughing.]

crazy though, like four out of five of us have lived sober lives up until a year ago.

Abels: Yeah, but none of us do stuff, like smoke or drink at all but I think…

Sammis: Long story short, and I’m not going to go into details, but once I got punched in the face by an RA [Residential Advisor] on a college campus.

The Owl Mag: Which college?

Sammis: I don’t know, it was in Sacramento, but I honestly don’t know the college.

The Owl Mag: I mean, I think there’s just the one, haha. Awesome. Well done.

Freedman: At SXSW our speaker caught on fire.

Abels: We kept playing though.

The Owl Mag: THAT is rock star.

Rutherford: I come in with the rockstar moments.

Sammis: Hindsight is 20/20 though. I wish Jesse would have like taken a cigarette out and lit it on the fire. That would have been…

Rutherford: Don’t blow it up. I mean, I know it sounds really cool, but it was like a little flame…

Freedman: Uhhhhh, it was a pretty good flame though…

Check out all the interview photos HERE.