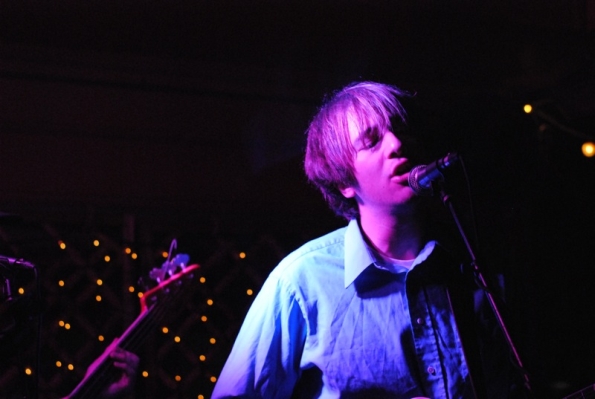 The formation of The Mumlers in 2005 seemed to be an inevitable occurrence that began to develop organically decades earlier when the members were elementary and middle school-aged younglings in a quiet suburban neighborhood in San Jose. Flash-forward six years and The Mumlers of late-2011 are substantially different than The Mumlers of old. As their tour with Two Gallants came to a close, The Owl Mag caught up with The Mumlers in Davis to talk about life on the road, the new experience of having women in the band, and their general fascination with Insane Clown Posse enthusiasts.

The Owl Mag: There have been some recent changes in the band with new members coming on board for the last tour. How did you guys meet?

Rosie Steffy (keyboards, violin, drums, vocals): Will saw me juggling on the corner of Broadway and 14th in downtown Oakland and was so impressed by my throwing skills he knew I would be the perfect bandmate.
Matt Montgomery (bass, vocals): I’m apprenticing Rosie because I’m a juggler too.
Will Sprott (guitar, lead vocals): We’re actually all juggalos too.
Matt Montgomery: That’s right, we’re all juggalos and jugglettes.
Will Sprott: We met at an Insane Clown Posse concert.
Rosie Steffy: No, you recognized us from the Insane Clown Posse concert.
Will Sprott: That’s right, I didn’t actually meet you there. But when I saw her juggling I thought, “that’s that jugglette from the Insane…Clown…” no, just kidding. We just watched this short documentary about juggalos… you should watch it.
Eli Reitz (drums): Will and I met on Craigslist. No… we’re roommates. His drummer didn’t show up one day and he was like, “dude, get outta bed! Can you come play this show with me?’
Will Sprott: Colleen Johnson also plays keyboards, guitar, and drums. She toured with us on this last Two Gallants tour.

The Owl Mag: Speaking of Two Gallants, you just concluded a tour with them. Talk a little bit about what that experience was like.

Will Sprott: It was a ton of fun. Those guys, just personally, are really nice guys and they are super fun to travel with. They have fun crowds, the people who come out to see them are just really excited to be there so it was always nice everywhere we showed up because there was a lot of energy in every room we played in.
Rosie Steffy: Our matching band vans looked really good together also…
Will Sprott: Oh yeah, we had a good and evil thing going on with our black and white matching vans.

The Owl Mag: Were you guys playing in bigger venues or smaller venues on this particular outing?

Will Sprott: It was really a mixed bag. We would play really nice venues one night, then we would play in a hotel lobby in Rapid City, South Dakota, or on a levy next to the Mississippi River in New Orleans, or in a swanky hotel in Toronto.

The Owl Mag: Was there one stop on the tour that was particularly memorable? Or a stop where something crazy happened, like someone getting lost in the city?

Will Sprott: Atlanta was really fun. We played to this raucous crowd that was all ages, so there were a lot of young folks there. Oh! Then somebody got engaged during the Two Gallants set which was nuts because I’ve never witnessed that before. They got up on stage during the set and the guy proposed. What other crazy stuff happened?
Rosie Steffy: That same night I got lost [in Atlanta] and fell asleep on the ground – that was fun.
Will Sprott: That’s true, we lost Rosie and were looking all around the city for her and it turned out that she was just asleep in someone’s front yard.
Rosie Steffy: I was just trying to star gaze and got a little too dreamy (laughs).

The Owl Mag: The Mumlers played at Treasure Island Music Festival in 2010 and played SXSW last March. Do you have any plans in 2012 to play at any festivals or return to SXSW?

Will Sprott: We’re playing the End of Times Festival at Machu Picchu (laughs). I’m not super excited about going back to SXSW. I mean, I’d go just to go but it’s not all that fun to play, but it’s definitely fun to be there. At this point, we don’t really have any festival dates booked, but you never know what’s going to happen.

The Owl Mag: Because of the changes with new band members coming in, has it been difficult getting everyone on the same page or in the same groove prior to going out on the Two Gallants tour?

Will Sprott: Well, since everyone went under extensive plastic surgery, name changes, and that kind of thing, they all know the songs still, they just look way different. Everyone was over their old identity and just stopped playing their old instruments. We had a good amount of rehearsal time before going out on tour. We were out the whole month of September so we pretty much spent all of August playing together which gave us enough time to make it work.

The Owl Mag: What’s been the biggest difference between this new lineup as a foursome as opposed to the previous six person band?

Rosie Steffy: More space in the van?
Will Sprott: I played with those guys for years and years, so we obviously had a really easy rapport with each other. But at the same time, it’s been fun to play with other people and to have their input into the songs to see what happens. It has also been fun playing with women because they sound really… nice when they sing.

The Owl Mag: And I’m sure touring with a bunch of guys is much different than touring with two ladies in the band.

Rosie Steffy: 50/50!
Will Sprott: It was a good balance. You get sort of dude overload when you are in a van with six guys, which is what we did for a long time.
Rosie Steffy: The van actually started smelling really interesting during the tour, but it never smelled bad. Which is pretty impressive and possibly related to the gender ratio (laughs).

The Owl Mag: Some of the songs on your albums Thickets and Stitches and Don’t Throw Me Away are inspired by your experience growing up in San Jose. In particular, I’m thinking about “St. James St.” What is that song about?

Will Sprott: That specific song is about this guy named Dewberry who used to live in my neighborhood. When he would walk around, he was just the coolest looking guy I’d ever seen. He would wear these flowing silk shirts, always had his bare chest to the world, and would wear big furry hats. He just looked… good all the time. And he was always going to 7-11, so the song is really about him and me and our imaginary life together. I like when you can look at your literal surroundings and then all of a sudden they seem magical. That was what I was trying to do with some of those songs – just looking at my own neighborhood and seeing these deeper worlds within them and trying to make them into something good.

The Owl Mag: Prior to touring with Two Gallants, you played a solo show at Great American Music Hall. Are you performing new material at those shows or your own solo material?

Will Sprott: It’s a hodgepodge. I like letting the songs sort of live in different incarnations. I like playing them by myself and playing them with other people. There are certain songs that don’t really work so well with a band. A few I’ll play at those [solo] shows that I don’t play with The Mumlers. But other than that, they’re pretty much the same songs. I don’t really differentiate between songs I work on for The Mumlers and other songs, it’s just writing songs.

The Owl Mag: At the end of the month, The Mumlers are doing a Halloween tour and on the October 29th you’re playing at Brick and Mortar in San Francisco with He’s My Brother, She’s My Sister. Are you guys planning on dressing up for the show since it’s slated as a Halloween show?

Will Sprott: Yeah. We’re hoping to do the whole tour in costume. We’ve been having band meetings on what we’re going to dress up as so we’re working on it. The other day we were talking about maybe starfish, but we don’t know yet. It will be elaborate though, I can say that much.

Catch The Mumlers dressed up as starfish in San Francisco at Brick and Mortar on October 29th, in Santa Cruz at Moe’s Alley on October 30th, and in San Jose at Pagoda on Halloween night.