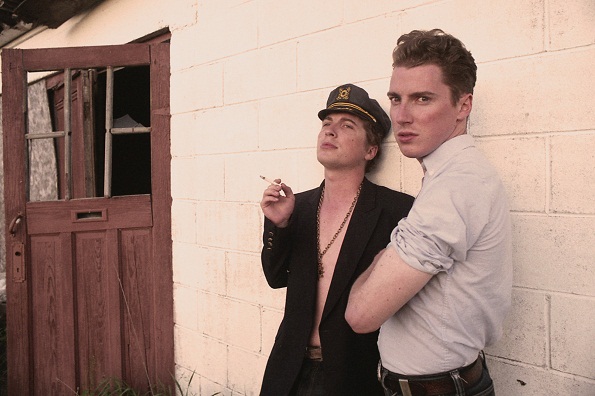 Canadian duo The Magic is comprised of brothers Geordie and Evan Gordon. The band’s debut album Ragged Gold is full of upbeat pop tunes that contains ’80s-inspried synths and beats, electro-funk, and warm, impassioned vocals. The Owl Mag spoke to singer Geordie about songwriting and his taste in music.

The Owl Mag: Hi Geordie. Talk us through the songwriting process. What are your starting points and how do you develop from the idea to the final song?

Geordie: Musically all my songs come from just fooling around on guitar or keys at home trying to find something that sticks. Sometimes I’ll play along to a drum machine so I won’t get stuck in the same old groove. I always make up gibberish words while finding the melody, then fit in words later. From there I try to lay down a demo in my little home studio and arrange all the parts while the cement is wet.

The Owl Mag: The theme of your song “Mr. Hollywood” captured our attention. Tell us about the relationship between storytelling and your music.

Geordie: I actually write very few story songs. I tend to use more mood-based personal feelings type lyrics. However, the songs with a clear narrative seem to really speak to people. I think I had just read a book about Rock Hudson when I wrote “Mr. Hollywood.” Ironically, we have spent a lot of time in Los Angeles in the last few years, but I had never been there when I wrote it!

The Owl Mag: Tell us about the sort of music you like listening to.

Geordie: I mostly listen to old records at home. Soul, all the classic vocalists and some smoother ’70s stuff. Every now and then a new Top 40 song will come along and blow me away, but mostly I stick to the AM dial.

The Owl Mag: Some of the arrangements sound like they could soundtrack a film. Do you have any visual references when you write/record?

Geordie: I think the whole point of music is to conjure up all sorts of feelings in a listener. Every word, chord, and sound should remind people of a place they’ve been or a part of their life. The images I associate with a song might be totally different than the listener, but I hope they are dreaming of something while our song is on.

The Owl Mag: Which musicians from amongst your peers do you rate?

Geordie: There are tons of people doing great things around Toronto these days. A band called Bruce Peninsula are one of my favorites. From an industry standpoint I look up to Feist for how she has found a wide audience without having to pigeonhole to one kind of music. Just presenting great songs and performances in any style is what I really want to do.

The Owl Mag: Does playing live inform the way you write and record?

Geordie: I’m glad it has taken this long to get this debut record out because everything is a learning experience. Every time I sing a song live, I play around with it and it grows just a little bit. I have a history of recording a song as soon as it’s written, but I think waiting to road test it can wield better results.

The Owl Mag: Tell is about what it’s like working with your brother.

Geordie: We’ve been working together so long that musically it’s great because we don’t really have to discuss things much, he just gets it. In terms of business – of getting the band working and out there – I owe everything to Evan. I don’t really have the head for hooking shows up and such but Evan is very driven to get this project off the ground finally!