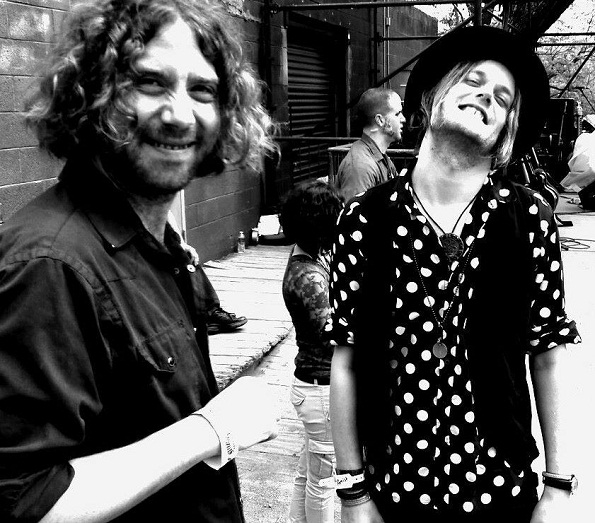 Sitting with founding member Terry Wolfers on the second day of Governors Ball 2012, we discussed the anagram of Alberta Cross, the new album Songs of Patience out July 17, and his dream of playing with The Verve.

The Owl Mag: Where did you first get the name Alberta Cross?

Alberta Cross: Well we’ve kind of been toying around with what it is. We’ve been saying it’s an anagram – we don’t want to give it away you see, it’s nice because it’s quite a strange name. Some people turn up at shows and they think it will be a girl, and especially because of Petter’s voice too, so we’ve decided to keep that mystery going a touch longer.

The Owl Mag: When you first got signed to a label, how quickly did things start to change for you in terms of support and organization?

Alberta Cross: We got signed pretty early, we had only done acoustic shows (just the two of us), and then after just a few shows, four shows together with the band, we got signed, and it was just one of those things—a record deal man! It’s strange, not even looking for that, all of a sudden we got signed. It was great, we were on Fiction in the UK, and there was a guy, Jim Chancellor, who runs it and he was just amazing. He was one of these record company guys who pushed to really support artists. He knew we weren’t going to be an overnight success, but he wanted to – he had faith. And unfortunately Fiction was a part of Universal, so they had to say if you’re not selling records, we aren’t doing it. It was a wonderful experience – we were going to their headquarters and Cat Stevens would be in the office, so it was pretty amazing.

The Owl Mag: How is it living in Brooklyn now?

Alberta Cross: I love it – it’s just a lot more accessible. London is so big — the trains shut down at 1 or 2am and then it’s all night buses. Obviously, there’s so much energy – in comparison, I love it. I miss London terribly for friends and family and all those things you can’t get here, but I don’t see myself being able to live in any other city in the states.

The Owl Mag: Congratulations on the album being out this month (Songs of Patience, out today). When did you begin the process?

Alberta Cross: It took one year – we were touring a lot, and then we struggled to get in to the powers of writing a lot. There wasn’t a great deal of time, you try to do things in sound checks, but sometimes you don’t even get them. You’ve got your producer – and he can only do 7 days, and if we weren’t behind it, we really didn’t want to do it.

The Owl Mag: Were there five different producers?

Alberta Cross: We had Joe Chiccarelli who was the main producer and the last producer we worked with was Claudius Mittendorfer who has been doing stuff for us. We’re actually going to work with him on the next record pretty soon. We do a lot of the production stuff ourselves — like on the first EP – but you’re not allowed to have credit for that, it’s a strange thing. Luckily, we’ve found someone great.

The Owl Mag: Initially, who were the bands that really inspired you to get involved in music?

Alberta Cross: My parents listened to a lot of music and neither of them played anything. There was always music in the house. I think just growing up and knowing that it was in everyday life, it made me feel really special. I started playing guitar, the bass, loved playing the drums. Bands like The Verve were a massive influence for me – like that first album and the EPs at the time, and bands like Shoegaze and Ride and Teenage Fan Club. I hit that time where music in Britain was brilliant; there were so many fucking good bands. Festivals like Redd and Leeds, and the Pumpkins coming over – it was such an inspiring period to be brought up. I’d go to shows and it would be so frustrating because I’d want to be there.

The Owl Mag: You’ve toured with a lot of great bands in the past – are there any rising groups now that you’d love to tour with now?

Alberta Cross: A dream, well kind of – there was a little thing that Simon Jones (the bass player from The Verve) got some of our music, and they were always hit or miss if they’re going to carry on. There’s such a weird vibe with those guys, so that’s been mentioned. I would love to tour with Spiritualized – we toured with the Vultures and that was incredible. The best thing was that none of them treated us like anything other than people.

The Owl Mag: Are you excited about seeing any other bands today?

Alberta Cross: I’ve seen Devendra once before – it was fantastic in Kentish Town in the Forum years ago. Beck is going to be amazing too. It’s an absolute pleasure when you play something and you get to see an act who you’ve never seen before. Fiona Apple obviously as well. Yeah, I’m excited.