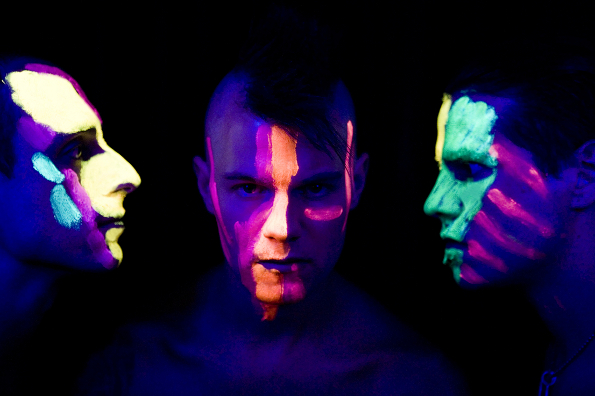 It’s possible that you’ve seen or heard Street Drum Corps — but you just didn’t know it. They’ve filled venues in Hollywood, been part of both Warped Tour and Taste of Chaos, opened for great bands worldwide, played in numerous amusement parks across the US, and even appeared on American Idol with singer Travis Garland. For the past eight years, Frank Zummo and brothers Bobby and Adam Alt have built an entertainment company — literally from the streets up — based on their own special brand of punk rock drumming. We caught up with Frank Zummo and Bobby Alt to find out what’s coming up for the hardworking drummers.

The Owl Mag: How did the three of you meet and how did Street Drum Corps originally come about?

Bobby Alt: SDC was created in La-La Land (Los Angeles)! In April 2004 we came about as a mobile trash percussion group to perform halftime shows for basketball events at The Staples Center for the LA Lakers or Clippers. Now 8 years later The Clippers use our song “Knock Me Out” as their fourth quarter pep song to get the crowd going in the Staples Center. Hah!

The Owl Mag: You’ve now been together eight years, a long time for any band. Congrats! What keeps it working?

Frank Zummo: Thank you! It’s been an absolutely incredible ride! The three of us are best friends and love what we do and have created. We still have so many goals and dreams to reach.

Bobby Alt: The key to any project or relationship is communication — that’s everything. I want to know exactly what Adam and Frank are thinking at all times. We keep ourselves busy with booking new gigs, writing songs, performing live, editing videos, having BBQs, and celebrating life with our families.

The Owl Mag: What’s your songwriting process like? Does it make it easier that all three of you are drummers?

Frank Zummo: There is no set formula. Our songwriting could be anything from a concept, title, beat, new found instrument that inspires us, programmed idea, or something we recorded into our phones.

Bobby Alt: Musical inspirations come and go for sure. When SDC was first writing and recording, it was tribal rhythms, marching bands, and hip-hop; then industrial dance and experimental music; then rock and pop, street performers, and Stomp. Now some of the harder dubstep and electro music is what’s inspiring me.

The Owl Mag: You recently left a major label and have gone back to putting out your music yourselves. Tell me about that experience — what led to the decision, what have you learned, how things are going now.

Frank Zummo: We really had an amazing learning experience with Jimmy Iovine and Interscope. We fulfilled our Interscope agreement and at the end of it, Interscope was on a different page then us. We’ve moved on and have put out a few things on our own.

The Owl Mag: Speaking of putting out music, you’ve been working on a new album for a while now. How’s that going and when can we expect to hear it?

Frank Zummo: We actually have about three records’ worth of music in the can. Right now we are very focused on building our brand out. There are so many moving parts of this company and everything has to be in the right place.

Bobby Alt: Over the next few months we will be releasing a song a month at StreetDrumCorps.com. The last song we released was with our long time friend and producer Jamie “Optimus Rock” Rise. The song is called “God, Oil, Rock & Roll.” It’s on iTunes, and there is a video on YouTube that I directed, and my brother Adam edited, using footage we found on the internet.

The Owl Mag: You’ve created a franchise of sorts with SDC Bang – it doesn’t seem like any other bands are doing something like this. Explain more about what SDC Bang is and how it got started.

Frank Zummo: Everything is now called Street Drum Corps, with the exception of our Halloween Blood Drums show. We are able to have an army of drummers and be able to perform in many markets. We have about 50 trained drummers that know the SDC show, and they perform it all over the US at theme parks, fairs, sporting events, performing art centers, colleges, private events, and tours. It’s been the highlight of our company to be able to build this team of drummers and have all these shows across the US.

Bobby Alt: We even host drum workshops for all ages, all over the world! It has grown, and so we have found other like-minded performers/drummers to take part in these productions. We enjoy the work, and so do our SDC BANGERS!

The Owl Mag: You’ve worked with a lot of great drummers – Tommy Lee, Adrian Young, and Shannon Leto just to name a few. Which other drummers are you still hoping to collaborate with?

Bobby Alt: I have been in discussions with Mickey Hart from the Grateful Dead about a future collaboration with SDC. He is interested so we will see…

The Owl Mag: An additional question for you, Bobby – do you prefer singing or drumming, and why?

Bobby Alt: Right now I am very much into the songwriting, producer, and singing process. It is new for me, and I feel like a teenager again discovering something new and exciting. I also have been having fun creating beats using computers, drum machines, plug-ins, and keyboards… but put me behind a drumset or a garbage can and watch out! The fire is still burning for the drums — that will never go away, and nothing can replace the over 20 years experience I have as a drummer.