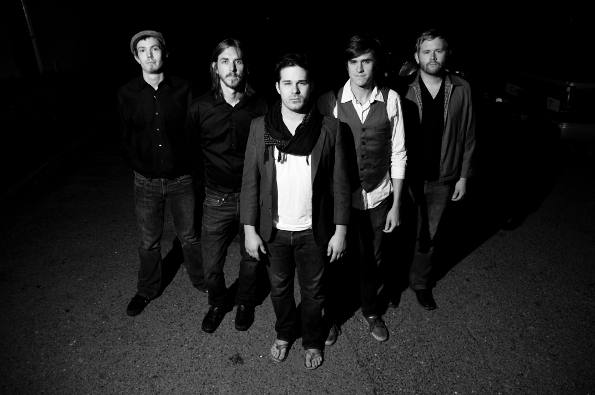 Stomacher is five childhood friends who started making music together that came out moody, atmospheric, and sometimes a bit creepy. Jarrod Taylor (vocals and guitar), Jeff Tollerson (bass and vocals), Stephen Reinhardt (guitar and vocals), Jonathan Lazarus (drums and percussion), and Greg Francis (guitars and keys) have made a nice mark with a previous album, Sentimental Education — filled with slow, dark rhythms and vocals that didn’t disappoint. Now the group has a new album Clara, set to be released May 19, and will more than likely be something worth checking out. Taylor took the time to talk with The Owl Mag‘s Hillary Smith about how a drive through New Mexico changed his musical life forever, how strikingly different but still familiar Clara is from their previous work, and where the hell these guys fit in to the big, ever-expanding mass of musical creation we call the music scene.

The Owl Mag: How was your day today, do anything fun?

Jarrod Taylor: I had the day off work. I shaved; I had a beard growing. I took my dog out to the bathroom several times. We went to a pub and now we’re at rehearsal. How was your day?

The Owl Mag: It went pretty well, not as exciting as yours though! Where do you work, if you care to share?

Jarrod Taylor: I work with developmentally disabled people; I work in Concord and live out there as well. I’m at a facility that has six different programs including early intervention, high school-age teens, adults, and seniors. I really do love it, and love being around those people.

The Owl Mag: That sounds great, wow. Alright, to the music! How do you feel about your upcoming album Clara?

Jarrod Taylor: We made it in a different way than we typically do; it was a lot more fun. I don’t have any unpleasant memories of making it. I feel like the songs are definitely superior and the work that went into it was really hardcore.

The Owl Mag: How would you say this album compares to Sentimental Education?

Jarrod Taylor: It’s not as overbearing atmospherically. We recorded it live. While we do dive in heavy in the atmospheric sound all the time, it’s not as suffocated. Sentimental Education was a lot denser. It (Clara) doesn’t depress the shit out of me.

The Owl Mag: Where would you place yourselves in the music scene?

Jarrod Taylor: We don’t play garage rock or any kind of ’80s band music but that’s the kind of stuff I come across the most. It’s just the stuff I’m more overly-familiar with. We’re definitely not a rock band, definitely not a pop band, but somewhere in there. I think of it as pop music but it’s just the tools are different. They all cross-pollinate, there sort of is no definite genre anymore. I feel like any band has that sort of issue. Other than the niche genre bands which exist, a lot of the bands we play with take from so many different places that it’s really difficult to pin down, which is cool. I like that.

The Owl Mag: How long have you been making music?

Jarrod Taylor: Since I was young. I think I started playing guitar when I was in 3rd or 4th grade and I’ve just been kind of tooling around with them ever since. You’d think I’d be better than I am.

The Owl Mag: Hey, maybe you’re selling yourself short! Do you write a lot from personal experience or are they more stories or things you see?

Jarrod Taylor: Definitely. I think to avoid being overly-personal, I try to call from different ideas, different places, different stories, and sort of interject my life into them. Bright Eyes, for example, you know he’s upset about something because he’s telling you what he’s upset about. I definitely like to incorporate fantasy in it, a little Lord of the Rings, shit like that.

The Owl Mag: Have you always been attracted to creating sort of slower, atmospheric music?

Jarrod Taylor: Yeah, actually [laughs] I don’t know what it is, I just love it. It comes down to the fantasy thing. I love classical music. I really like the escapist type music. I’ve had a few experiences in listening to music where it was so profound to me that those moments have sort of defined everything I’ve written. I remember when I was 14, I was going to a family reunion and Radiohead had just come out with a new album. We were driving through New Mexico, I listened to “Climbing Up the Walls”– one of the scariest sounds. I’ve always been drawn to recreating that feeling it gave me. It’s not a fearful thing, it’s more of a “If you can confront the darkness, you can sort of live it and feel comfortable.” I love sounds that come from nowhere, like when you can’t tell what’s a guitar or what’s a keyboard and what’s this and what’s that.

The Owl Mag: What do you hope to accomplish with this album?

Jarrod Taylor: Make some money [laughs]. I guess I just hope it’s received well. I do take it really hard when someone doesn’t like our music. I don’t know what it is, I can’t just push it aside. I try to stay in a positive headspace. Everyone puts so much into it, that’s it’s disheartening when someone doesn’t take that into account. Ultimately, it’s nice to feel connected to something and supplying that for someone else is a really special thing and the few moments that we do that for someone mean a lot. Continuing sort of achieving that would definitely be the priority.