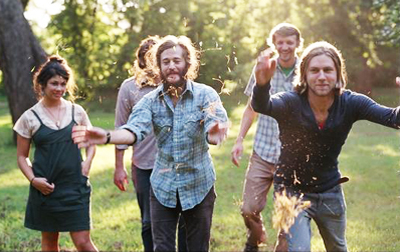 Other Lives have been together for ten years and now the world is starting to see their honest and beautiful allure. After touring with Bon Iver, Jenny Hsu, Jonathon Mooney, Josh Onstott, Colby Owen, and frontman Jesse Tabish are hitting the road again this next year with Radiohead. Singer Jesse Tabish talked with The Owl Mag’s Hillary Smith about the production ideas behind the song “For 12,” how it feels to have people really know your music, and why their latest album Tamer Animals came out in the glorious, charming way that it did.

The Owl Mag: Over summer you were on tour with Bon Iver, how was that experience?

Jesse Tabish: It was really fantastic; up until that point we had really only been playing 200-300 capacity venues so the scope and production of the whole thing was a new experience for us and one that we’ve really enjoyed. It was a great opportunity and we had a blast. It’s kind of a different world, you know?

The Owl Mag: How do you feel about this past tour in the U.S.?

Jesse Tabish: We just got off and it was actually our very first headlining tour ever, the first one in the states. A lot of people came out to our show, it was well-received, and we felt very excited and very lucky to be where we’re at.

The Owl Mag: And then you will be touring with Radiohead in February, are you excited for that?

Jesse Tabish: Yeah I’d say that’s an understatement. It really has been a dream of ours to be able to do that.

The Owl Mag: What are you most looking forward to about headlining?

Jesse Tabish: You know, I think since we have some time at home, we’re gonna be able to work on some new ideas. I look forward to going out and playing better shows, hopefully, and improving the sets. We’ve been playing the set for eight months now and we feel like it can grow and be better, so that’s what we’re shooting for.

The Owl Mag: Would you say your latest album Tamer Animals is a very different sound than your self-titled album released in 2009?

Jesse Tabish: I would say it’s very different. It was a different approach musically and also different settings. We decided on Tamer Animals we were going to self-produce which lends itself to exploring sounds and tones that we wanted. And the first one was a band record and recorded in a proper studio. The two are very different records and we wanted a change from how we were approaching songwriting and recording.

The Owl Mag: Do you have any artists or bands specifically that you draw inspiration from?

Jesse Tabish: Um you know, not to beat it into the ground, but Radiohead has been a huge influence.

The Owl Mag: What has been your most memorable or weird experience on tour so far?

Jesse Tabish: You know it’s funny, I think the whole thing’s kind of weird, but the most memorable is going into this record, we were virtually unknown and to some degree still are, but there have been sometimes where hundreds of people have come out for us and they know our record. It’s been really stunning to know this actually works. That really has made an impact on all of us in the band and really kind of given us a lot of energy and it’s very heartening. It’s so cool because we’ve been a band for ten years, but for people to come out, finally, it’s fantastic!

The Owl Mag: Could you talk a little bit about the meaning of the song “For 12?”

Jesse Tabish: My sister wrote and directed her own film called The Erased, and she asked me to do music for it and that’s where I came up with the scene for “For 12.” At the time I’d been working on this little acoustic bit and just happened to throw them on top of each other. The name “For 12,” well, I had hoped to write a piece of music for twelve musicians, but that never happened and so the name kind of stuck.

The Owl Mag: What’s been the most rewarding part of life as a musician for you so far?

Jesse Tabish: It kind of comes back to being able to have that connection with an audience for me; to be in the right space and the audience be in the right space. When those two things happen, it’s a real connection and we’re all kind of experiencing this thing together. The idea of music kind of becomes about people and putting everybody’s mood to this positive place. And when that happens, you know it’s right.