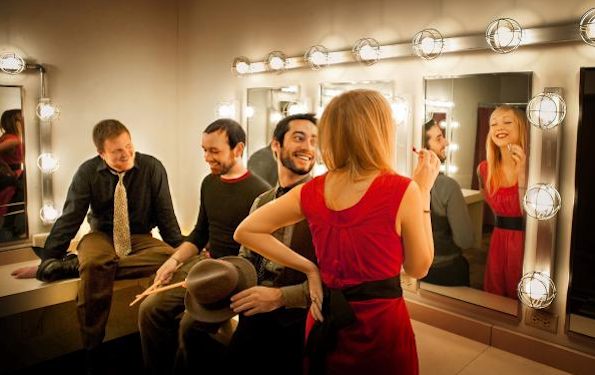 While on the road somewhere in the middle of nowhere in Texas, amongst wildlife (zebras, alpacas, dead wolves) and bandmates, Adam Turla of Murder by Death spent ten minutes of his day off chatting with this lucky Owlette.

The band had played an “amazing show” in Austin, Texas the night before, “thanks to a great crowd,” according to Turla. The Austin show was the fifth night in their cross-country tour with dates listed through April of this year.

For our SoCal Owlers, MBD is playing this Thursday the 10th at the Detroit Bar in Costa Mesa and then again Friday th 11th at Echoplex in LA. Their newest album, Good Morning, Magpie, (Vagrant Records) awaits you and will likely make you an instant fan (as it did this owlette!).

The Owl Mag: How would you describe your sound?

Adam Turla: I try not to, butâ€¦ uhâ€¦a rock band with a bunch of varied influences, including a cellist who comes from a classical background. I’d say rock with some alt-country and country-Western in thereâ€¦ we have a darker sound without being heavy.

The Owl Mag: Who influenced your music?

Adam Turla: The rhythm section guys have more obvious influences. Degan likes metal and hard rock a lot. Our bass player likes groups like Mogwai and Explosions in the Sky. I don’t listen to music as avidly as they do, but I like Soul music a lot. I don’t really have like a favorite genre of music and I really don’t listen to a ton of modern stuff.

The Owl Mag: I’ve noticed hints of like, Leonard Cohen and Johnny Cash in your sound, have you heard those comparisons before?

Adam Turla: I do like Leonard Cohen, and yeah. I’m not really a fan of Johnny Cash, but we’ve heard that a thousand times, and I think of it as a compliment.

The Owl Mag: Are there bands that you’re tracking or really interested in that you’d possibly like to tour with?

Adam Turla: We’ve been doing this for more than 10 years now. My desire to play with my idols to like, fulfill my ego, doesn’t interest us anymore. I prefer to play with great younger bands and see what they do. Since we have some experience, we try to help out the younger bands with things like making the band work. It’s really hard to be able to stay afloat, financially and spiritually on the road.

On this part of the tour we have Damion Suomi & the Minor Prophets and The Builders &The Butchers opening; they’re both killer live bands. The audiences on this tour are eating them up. I’m excited about them. There’s also a band called J Roddy Watson & the Business that we’re friends with and that we love. The bands that I’m really into right now are typically smaller bands that aren’t big successful club-bands; bigger indie bands aren’t doing much for me these days. I don’t know why, but the style that is really popular right now just isn’t my thing.

The Owl Mag: I know you released Good Morning, Magpie last April; are you guys promoting any new material with this tour?

Adam Turla: The way we tour is really different from some bands. We don’t do anything based around an album or a single. It’s just not the kind of band we are. A bunch of people refer to us as like, a “blue-collar band,” like a work-horse band. The idea is that we hit the road a lot. We do as much touring as makes sense and our tour centered around a brand new album isn’t necessarily going to be the best tour that we’ll have, in terms of attendance or that sort of thing. We tend to just go out and hope that people will show up. We’re lucky because we have the most amazing fans that have supported us for a really long time. They don’t seem to care if we have a new record out or not; they’re just happy to come out and support us.

The Owl Mag: What part of this tour are you most excited about?

Adam Turla: We played Costa Mesa last April, and it was a great joint. We’ve never played the Echoplex, but have heard it’s good. This tour is made up of about half clubs we really like and half clubs we’ve never been to. It’s nice to have that sort of a mix.

One thing about the set that we’re excited about are these lighting boxes that Sarah, our cellist, and I made. It’s a very lo-fi, old-fashioned-looking light showâ€¦something that adds a little color to the stage. I made these wooden boxes with all of the cables and the lighting stuff inside. The bulbs stick out of the boxes with these like, shell light covers over them. It looks sort of like the lights across the front of the stage at the Grand Ole’ Opry.

The Owl Mag: Is there anything that you’d like our readers to know about the tour or MBD?

Adam Turla: We’ve been around for a while. I feel really strong about being able to put on a good performance that’s not sloppy and that’s gonna be fun. We really work on making our live show something that the audience can sort of participate in. We love a good rowdy sing-a-long crowd. It’s definitely good, fun rock ‘n’ roll.