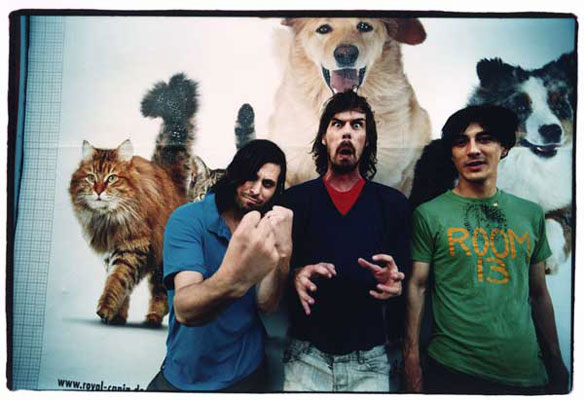 Liars went to work — really deep, no-distractions-work, on their latest album WIXIW, and a hell of a lot of people would call it worth it. Liars’ Aaron Hemphill talks to The Owl Mag about the world they lived in while creating WIXIW, a month spent in the mountains, and what he’d like to happen at shows.

The Owl Mag: Your album WIXIW was just released this month, were there any struggles involved?

Aaron Hemphill: I’m proud of the work that we did and proud that we, you know, tried new things that we wanted to try. I’m excited that it’s out there finally. It’s kind of a bizarre feeling where I don’t really know what to think of it. But ultimately, I’m very happy that it’s out, and I hope people like it.

The Owl Mag: What’s the meaning behind WIXIW?

Aaron Hemphill: It’s pronounced “wish you” — there’s a lot of meaning. One is, it’s a palindrome, and it drives the power because they’re words that begin in the same way that they end. In this record sometimes we found the solution to a lot of problems were things we had gone through before. It’s important to know that’s not a regression, but still a forward-moving progression. You don’t end up in the same place you begin. It’s comforting to know it’s not for nothing. It’s also a visual schematic by how the record came out, it’s bookended by two low key songs, and the “x” in the center indicates the title track.

The Owl Mag: In the recent studio video of all you guys, Angus says that you and him went to a cabin in the mountains for a month, is there any reflection of that time in the album? Did you learn anything from being there?

Aaron Hemphill: It wasn’t about learning anything; it was just more about getting away from everything and focusing. We learned a lot about each other and we collaborated on the record together there. A lot of times Angus and I will write songs and then compare them with each other, but this time we decided to collaborate earlier on.

The Owl Mag: In the same video Angus says he had “a loss of self,” what do you think he meant by that, if you feel comfortable answering?

Aaron Hemphill: I think in general on this record we just worked so hard and gave up everything that didn’t have to do with the album to just really dive deep into it all, so loss of self has to do more with a loss of perspective. We were just holed up in our own little world, so I think that’s what he meant.

The Owl Mag: From looking at your studio, what I saw of it, you guys seem to be brimming with ideas and tinkering with different combinations of a vast amount of programs and instruments, how long did it take you to sort of nail down the exact sounds you wanted?

Aaron Hemphill: Well it’s an entire process, really, we were exploring new sounds and really trying to figure out what we wanted to do for the record. There was actually a time where we had to force ourselves to stop experimenting, so I would say the entire time.

The Owl Mag: What is your process on coming up with the tracks?

Aaron Hemphill: In general Angus and I would write separately, but we were involved with each other’s songs much earlier on (this time), it varies from song to song, he and I just basically write all the songs.

The Owl Mag: What do you hope people will walk away with from a show?

Aaron Hemphill: I hope they have a good time and I hope that they walk away with a different perspective on the album, I don’t think that we planned on finishing this album perfectly, I think we’re happy if there are some mistakes that seem out of place, that would be the ultimate achievement, and to make people hear the songs a different way.

Check out our review of Liars at the Great American Music Hall here.