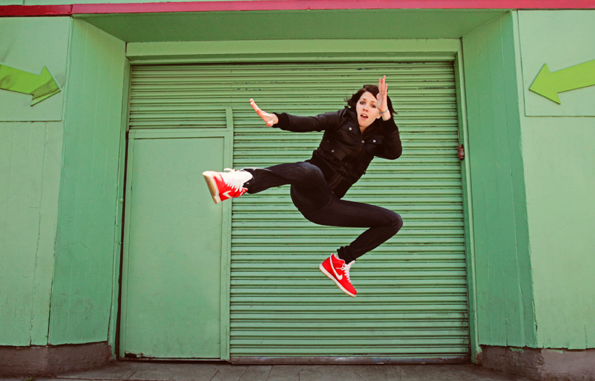 Chicago-raised and Bay Area-based indie hip-hopper K. Flay has been on the rise this year. From a spot at Outside Lands, to landing an official Beastie Boys remix, to the addition of a drummer, 2011 has been quite a year for the up and coming lady rapper. K. Flay took time out of her busy touring schedule to talk with the Owl Mag’s Justine Fields about coffee-frenzy poetry, recording a new EP, and meta-awareness on stage.

The Owl Mag: Thanks for taking the time to talk with me. How are you?

K. Flay: I’m great. I’m on the 5 right now. So, I hope our connection is good. There are some cows and sheep. Like sporadic sheep everywhere.

The Owl Mag: Where is this?

The Owl Mag: Okay nice. Going down. But you’ll be back up here next week. I know we’re pretty excited about it.

The Owl Mag: I was just reading at this time last year you were headlining the Rickshaw Stop, which is, in a year, pretty crazy to move on up to the Independent, so congrats!

K. Flay: Yeah, thank you! I was kind of looking back at the calendar and stuff, but it’s been pretty cool. You know, San Francisco is kind of one of the best cities to come up in. You know, the community is just so great in the Bay and everybody is really supportive, which is awesome.

The Owl Mag: If I recall correctly, for this particular show, did you do a contest for the first 50 people to buy tickets?

The Owl Mag: You still haven’t done it?

K. Flay: Nahhh, I work best on the poetry front like in speed and like on massive amounts of coffee. [pauses] I mean speed, not the drug, the rate of time.

The Owl Mag: Ha. Yeah, I figured. I was lucky enough to sample your new EP, Eyes Shut – it’s great! Is that kind of how this new EP came together—lots of last minute coffee binges?

K. Flay: Umm… well there were definitely some highly caffeinated moments. But, you know, it came about kind of really naturally. Like I was just working on some songs, really with no agenda. And I guess with the idea of putting something out, but just not sure what form it would take. If it would be an album, or an EP, or what? But I kind of ended up being in a little bit of a thematic vertex, or something. And it felt like the songs that are on it all center around a similar vibe and it just felt like a cool thing. So yeah, it came together weirdly naturally, I guess.

The Owl Mag: Slightly awkward, but in a good way?

K. Flay: Yeah! I mean, a couple of the songs I had worked on with a producer friend of mine who I know really well and who knows me and he doesn’t really do hip-hop stuff but it kind of just happened that he’s feeling what I’m doing and it was stuff like that which came about really organically and I’m just excited for it to get out there.

The Owl Mag: I’m wondering, when you come back here [to San Francisco], or to Chicago, your other home, are there certain people that are in the crowd that make you so stoked to be here, or embarrassed, or is it a different feel when you’re playing to people you know?

K. Flay: You know, I think playing hometown shows in San Francisco and in Oakland and in the Bay, it’s just so nice because my mom and my step dad live out here—they live in Oakland and they’ve been out here for a few years so they come out to all the shows and all of their friends, who are obviously parents-age come out. And all my roommates, two of whom I grew up with in Illinois—I mean, they knew me when I was straight up stressing over geometry proofs and shit like that. So I don’t know, it just feels really good. There’s times definitely when on stage I get a little bit, like, I suppose, inwardly focused. I’m like, “Oh Shit! I’m on a stage and people are watching me, which is very strange.” And it helps when I can see them in the crowd and I smile at them or they’re singing the lines back to me. Yeah, it’s just a really good feeling. Kind of makes it all feel worthwhile.

The Owl Mag: That’s awesome! So you talk about this moment when you’re onstage and it’s almost like a metaphysical moment and you realize what’s going on. And I know you used to be on stage alone, but recently, this year, you added a drummer.

K. Flay: I did! He’s sitting right next to me right now in the car.

The Owl Mag: [laughs] Where you did find him?! How did you end up teaming up?

K. Flay: So we met by virtue of playing music. He was in a different band before and we played a show together and we have a very similar mentality and a similar attitude toward music, just being enthusiastic about it. And, yeah, it just ended up working out. We started playing in August and it’s been going great. I think, from an audience perspective, especially for folks who’ve seen me before, it helps. Well, obviously aside from the sonic aspect of having live drums, visually speaking it’s nice to have something else to look at, to have something else going on. It makes it a more dynamic experience. It keeps the raw essence of it. You know, because at the end of the day the show–at least as I hope it is, it’s about rhythm and then it’s about kind of just being free and doing some weird stuff. So, it’s been really fun. And then, you know if I’m getting like cans and bottles thrown at me, at least I have someone else to dodge the debris.

The Owl Mag: Does that happen?!?

K. Flay: No, no! I’ve never had a bottle thrown at me—thank god. That’d be pretty intense. Actually, you know what, crowds have been super nice to me. I feel lucky about that. I was saying to someone, I think it’s kind of hard and mean to really heckle someone who’s up there by themselves. You have to be a really big asshole to do that.

The Owl Mag: Luckily you haven’t run into any of them! And I don’t think you will. I was lucky enough to catch you guys at Outside Lands, so I’d be shocked to hear if anybody did that, ‘cause it was a fantastic show.

K. Flay: Thank you, well, we’re pulling out a lot of stops for this Independent show, so it should be a lot of fun. 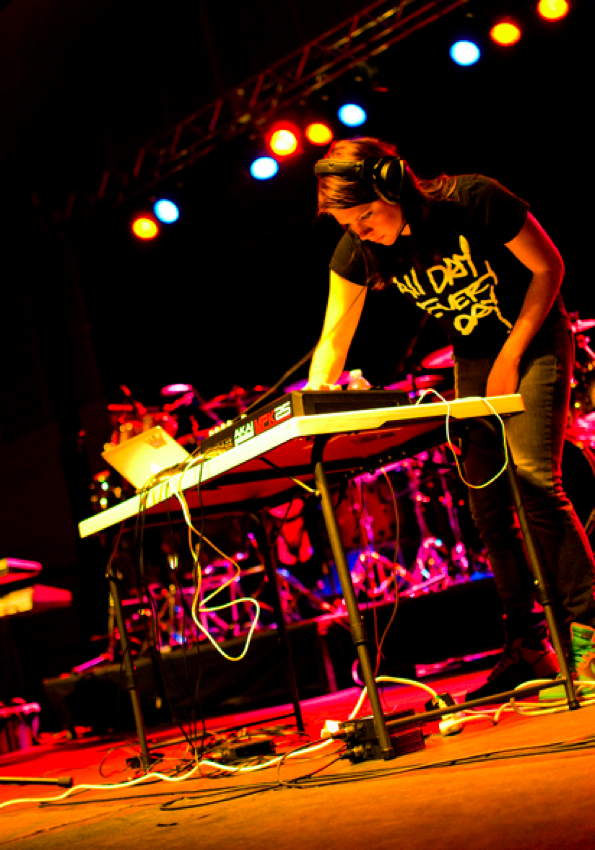 The Owl Mag: I imagine you’ve come a long way since August when you started playing together—you and your drummer.

K. Flay: I think Outside Lands was maybe our first show?

The Owl Mag: Whoa! I would have never known that.

K. Flay: Maybe second show ever. Now we’re like an oreo. Like we’re very neatly pressed together in a non-sexual way [laughing]. Sorry, that came out very weird. You know, platonic oreos.

The Owl Mag: Great way to say it! But it’s true, you’ve come a long way and there’s a long way to go in the next year, with this EP and a potential LP. Tell me, what can we look forward to after this?

K. Flay: So, the EP will be coming out top of the year and I’m in the process of really starting to work on tracks. I’ve got a lot of stuff that I’ve been kind of recording and is on my computer that I kind of need to contemplate finishing for real. Yeah, I’m just gonna be recording and hopefully put something out by maybe the summer? But definitely have a full length coming out next year and you know, I’m just excited to broaden the scope of things. I think with the EP it’s a little dark and I am kind of dark at times and I’m also very goofy and I want that side of things to be represented as well. So, I think, yeah, the album will be cool. I’m looking forward to just working on it. You know, recording and writing and stuff. It’s just really fun.

The Owl Mag: For sure. Well, we’re excited to hear! Thanks for taking the time to talk to me and we’re looking forward to your shows this week!