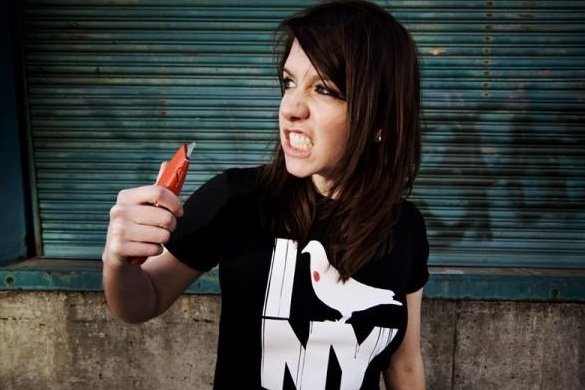 As the first day of Governors Ball 2012 came to a start, we sat with K.Flay on a hill overlooking the grounds as she discussed her beginnings in rap, family support, her inspirations, and what’s next.

The Owl Mag: How did you first get started rapping?

K.Flay: I first got started kind of on a whim very strangely – basically I was in college, talking to a friend of mine about mainstream rap music and sort of just complaining about it. He was defending it and was basically like, “You couldn’t do that, you couldn’t write a song.” A friend of mine down the hall in the dorm made electronic music, so he and I ended up working on a song together and then I bought a keyboard and started making beats.

The Owl Mag: Was everyone in your life supportive of that path? I know you went to Stanford and were doing the academic thing for a while?

K.Flay: You know what, everybody has been really supportive. It wasn’t like I irresponsibly quit a job and was starving on the streets or something. It’s been a really gradual transition and the orientation of my family and my friends has always been that if it makes you happy and you can take care of yourself then… It’s kind of actually fun, I mean my mom and my step-dad come to my shows at 2 in the morning in San Francisco.

The Owl Mag: Are they fans of hip-hop?

K.Flay: They are now actually – they like a lot of stuff. My mom loves Kanye. I think for a lot of the older generation, it’s all about exposure – it’s like any kind of music, you learn to love it.

The Owl Mag: Did you find it hard at first to balance your two paths as a student and working on music? Was the shift organic for you?

K.Flay: It was pretty organic. You know I played music in college but it was just always a side thing. It was always for fun. It was never something I thought I would be doing for real. In that sense, it wasn’t hard because I was really committed to my academic path. It’s just been a really weird thing. I don’t really know how I ended up here, but I’m glad I’m here!

The Owl Mag: I read that K. Flay was your nickname – did you feel like you had to create a persona (ie: Nicki Minaj, etc) when you started performing?

K.Flay: You know in a weird way I think having no persona is a persona. I haven’t; I think it would come off as really disingenuous and weird if I did that. There’s definitely a need for and a space for a larger than life persona and all that stuff, but I think alongside that it’s important to have more relatable or just normal artists; more of a rock ethos in a way and that’s more of the space I’m in.

The Owl Mag: Are there any emerging musicians or groups that you’re interested in collaborating with or are excited about at the moment?

K.Flay: At this point he’s pretty big, but I’ve been a School Boy Q fan for a long time now. I think his stuff is really great. I think he has a really interesting delivery and obviously his content is pretty insane; it’s gnarly when you really stop and listen. I really like Danny Brown. I did a remix for one of his songs, so I’m pretty stoked on that. Do you know that band Iconapop? They’re sort of new, right? They’re my jam in a major major way right now.

The Owl Mag: How do you feel about Azealia Banks? Have you listened to her stuff at all?

K.Flay: Yeah I have actually, I got introduced to her a while back through an industry person, who was like, “You should check this girl out.” I think it’s cool; I like that there are a lot of strong voices that are coming out with women in hip-hop. You have someone like Missy back in the day – it’s kind of freaky, kind of dance, kind of whatever. And that void to me has never quite been filled. I’m really stoked about it; her EP is really cool.

The Owl Mag: And what’s the next year look like for you? Anything you’re particularly excited about?

K.Flay: I’ve got some cool things coming up in the fall that I can’t really talk about. I’m basically in the middle of this summer tour to support my EP and we’ve been everywhere: Little Rock, Mobile, Alabama; everywhere. Actually I had some amazing Mediterranean food in Mobile, which is a little surprising, right? And when I’m done in August, I’m going to record for a month and a half.

The Owl Mag: Where are you recording?

K.Flay: It’s going to be a mix of places, but it’s going to mostly be in New York. It’s sort of been the place where I’m the most creative in the best way.

Check out our High School Reunion with K. Flay HERE!