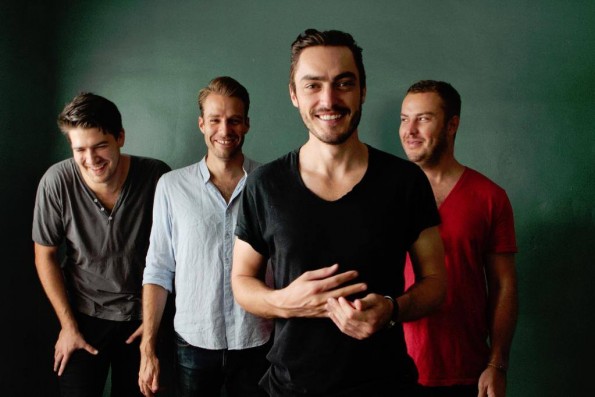 The band Civil Twilight are still relishing their victories after the release of their third record Story of an Immigrant. The album looks at the band’s roots back in South Africa and their transformation as people when they reached the states, weaving in Kevin Dailey, the band’s keyboard player, into the epic tale. The Owl Mag had the pleasure and privilege to chat with vocalist Steven McKellar about this record and how the group has been doing ahead of their upcoming performance at Brick & Mortar Music Hall in San Francisco.

The Owl Mag: Hi, Steve. How you doing?

TOM: Tomorrow (September 23rd) you are starting your fall portion of the tour. How are you guys prepared for that?

SM: We’re not. (laughs) We’re very unprepared. It’s gonna be great. We’re very excited… it’s good to be out in the road again. It’s a big push for me, y’know?

TOM: In one of your interviews, [you said that] you didn’t want to categorize the band’s sound; you want the band to have this individualization. How would you describe that within the context of your album Story of an Immigrant?

SM: First, I think that the truth of any band to form their own unique identity is culture. And I think that what we tried to do with this record is go about with the [cultural] pursuit. It’s not something we always want, but it’s something that you can’t really construct, so we threw out all the ideas of stuff being a special, unique band and just thought fuck it, y’know? Let’s just go and make music! If it sounds exactly like something else, then so what? We just wanted to make something that we were happy with and we’re proud of and that’s what we did with this record.

TOM: That’s good to hear. I do really enjoy listening to Story of an Immigrant. I have “Oh Daniel” stuck in my head right now. In interviews you also say that you want to feel the song of each song by writing it acoustically. Has there ever been an occasion when you haven’t felt the soul of a song? Maybe on your debut record [Civil Twilight] where it sounds epic in that way. Has that been a problem?

SM: Yeah, we’ve run across that problem before. You can always make a song a good song– you can always make it sound good by making it work acoustically. It might take a minute to work it out. For me, in order to find the soul of a song, it’s often just a very simple pulse, simple kind of theme. You find that sometimes you have to go back and strip it all down and find out what the song looks like naked. What does it look like when it doesn’t have all its fancy clothes on. That’s important to do. And on this record – I just recently finished recording acoustic versions of all the songs and that was very interesting, and it’s just totally bare-boned. It’s how we found out which songs stood out. It was surprising.

TOM: Staying on the same topic of finding the soul of a song. Do you start acoustically and then figure out how you’re going to make it a bit expansive?

SM: I think it works the other way around. We’d start off with all of the parts… and then you’d have to break down the song after that. For this record it’s a little bit of both. I think a lot of the songs are formed by playing together and jamming and some of them are formed in hour spans in recording. Some of them started off as these huge, massive productions and we’d have to chop them down a bit and some of them were riffs that we would like, and then we’d build on that one little riff. It was a bit of both on this record.

TOM: “Holy Dove” was a song where you built on one riff, right?

TOM: Have there been genres you’ve wanted to explore that are way different from the sound you have now?

SM: Yeah, I feel like we’ve only gotten started in exploration. I think that for so long we all have something we all know and we have something that people expect from us, and I think this record was a little bit of trying that [experimentation]. I think there’s a lot of more style and genres we can experiment with, but I don’t think we have the confidence yet. Yeah, there’s way more exploration to do in the future. We all have unique tastes and I think that things like that have come out in our live shows–they’ve changed a lot

TOM: What’s your secret recipe for having your sound the way it is?

SM: It’s a little bit of mistake. These kind of things often end up being mistakes. We didn’t plan to make a record that sounded this way. All we knew was that we wanted to make something different and new. What that was going to be we had no idea. And we looked at all the demos that we had written and each of the songs we were after all had this feel to them reminiscent of music we grew up with. And lyrically they all had a theme. When that appears, you can’t ignore that. It lines up in a creative way. I can’t tell you how it came about. Ben Allen, he produced the record helped us get it down. He’s a big help.

TOM: Yeah, I heard he challenged you guys to try hard to get that sound right.

SM: Yeah, definitely. He’s a sweet guy, but he can be a hard ass, y’know? He’s got a vision in mind on the record and that’s exactly what we needed: someone who can give us some direction and to keep us focused. We tend to, by ourselves, wander off into no man’s land (laughs). He’s the one that’s like “Hey, c’mon!” He was crucial in that.

TOM: That wouldn’t hinder experimentation… do you think that being challenged stopped you from trying things that are wait out of your comfort zone?

SM: No, I don’t think that’s the case. I think that, in a strange way, back to being a band. I thing that we were getting back to something, and that’s actually how we were getting back to our comfort zone. It’s like the other way around. It’s like we were pushed into this uncomfortable place we abandoned, back to a place that made us who we were and who we are. Getting back to that. Ben Allen definitely helped us with that. He reminded us why we were there; who we are. We had to find out our roles in this band, like who the hell are we? What kind of band do we want to be. That was tough at times. The hard part was actually writing. Once we started recording, that was another story.

TOM: You had to pick between fifty demos–how difficult of a process was that?

SM: Yeah, that was fantastic (laughs). I think that out of like fifty demos, we had to whittle it down to around twenty. And out of twenty, I think there was maybe three that all of us could agree on (laughs). That was pretty hard. But I think once we got Ben on board, that process began to get easier…before it was done, we would know straight away if it was right or not. And there were some strange moments where we decided to crush things down, and sometimes we’d just throw an oddball in there…then something magical happens. Those songs happened to be our best. “Story of an Immigrant” was always on the list [of tracks] that turned out to be different than how it was originally envisioned.

TOM: I guess it’s a form of evolution. It’s one of the positive parts of following a new track.

SM: It can be terrifying. As a songwriter you think to yourself “Hmmm, this is a good song, but what if we fuck it up if we try to make it better?” We ended up throwing songs because we couldn’t work it out. That’s always a bit of a fear. You can’t control that shit–that’s how the wind blows.

TOM: You’ve gotta follow the wind. Go with the flow. Yeah. Have you thought about collaborating with Dave Matthews? I’ve heard a story about interactions between [you,] Father John Misty, and the more lax Dave Matthews. Have you ever wanted to give that a shot?

SM: Oh, man. All of those guys I would dream [to collaborate with]. It would be amazing, yeah. I mean, I’d have to get over my boyish, little nervousness (laughs). I would love to…right now we don’t think we’re on their radar.

TOM: What’s the next chapter in this story of an immigrant? Touring? Making the next album in a couple of years?

SM: Yeah, I hope [releasing the next album] won’t be that long, actually. With this record tour, we’ll have a little break before Christmas, then keep touring. It all depends on how the record bears on radio. We’re just going to see how the record handles and then probably start writing next fall…for the next record.

If you want to check out Civil Twilight’s show at Brick & Mortar Music Hall, shoot us an email at contests@theowlmag.com by 10 am PST on October 8th for your chance to get in the door for free! Be sure to include your full name in the email and “Civil Twilight” in the subject line.