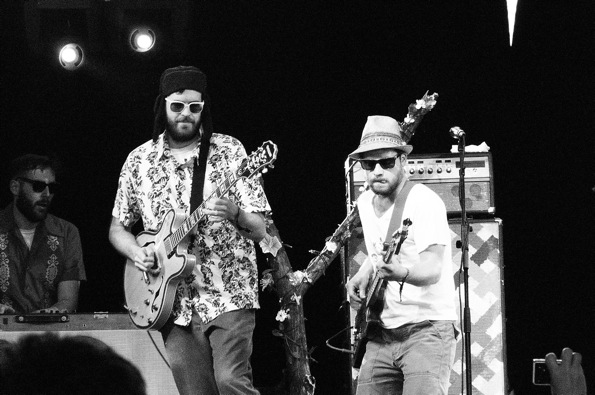 Dr. Dog’s Toby Leaman talks about the kind of shows he wants to give, the meaning behind the song “Lonesome,” and how after 20-plus years of playing together, there are still improvements to be made.

Dr. Dog has seven full-length albums and has been touring for over 11 years. They appeared on the Conan O’Brian show earlier this year and are still chugging along the same as they’ve always been. But this band is not static. Each album brings progression and, according to Leaman, a deeper understanding of each of their roles within the group. Their summer is jam packed with festival after festival including Outside Lands Festival in San Francisco. Their latest album, Be The Void, was released in February and their fan base is likely growing this minute. Leaman tells us about some embarrassing moments on stage, how their favorite game to play is “catch-up,” and about their plan to release even more tracks later this year.

The Owl Mag: When looking back over the different albums you guys have created, there’s a lot of progression structurally as well as just the overall sound, what, in your mind, has been one of these areas of progression as a group?

Toby Leaman: Well, I think the older we get, the better we are at just playing. And playing together. The most exciting thing and consistently the coolest thing to think about is everybody is defining their roles better and better. You know, having everybody understands what works for them within any context, it’s constantly changing, but for the most part I feel like the closer we all get to understanding what our roles are for playing our specific instruments, that’s sort of the most exciting. The tendency when you hear a song, especially when you’re young, is to sort of play on your own and not really think about what the other instruments are doing — to try and overcompensate things and not really understand the whole situation. I think the older you get and the longer you play, you get more satisfaction from being a part of a small unit.

The Owl Mag: What do you hope the audience will walk away with after a show?

Toby Leaman: My first hope would be that they had a good time and want to see us again. I mean, even beyond that I’m a firm believer in that people don’t go to shows to not have a good time. As a person who leaves his house every once in a while, I don’t leave just so I can stare at something, I want to experience something, I want to have a good time, I want to feel like I’m a part of something. And hopefully that’s what we do, hopefully that’s what people take away. And you know, obviously you only get what you give, and if they only come to not have any experience, but just to to vaguely process incoming information, then they’re probably not going to have a great time. But you know, if you want to have fun, I feel like we’re a good band to facilitate that. That’s sort of our whole goal. We’re not trying to play shows where we’re not having fun either, I mean that’s sort of an obvious thing to say, but you’d be surprised how many rock shows I’ve been to that just aren’t fun, they’re boring. If they’re not boring, then one of the singers will have a bad attitude, and you’re thinking, “What the hell are these guys doing?” They’re on the road and they’re wasting all this time and all this energy. Yeah, it’s troublesome sometimes, but you know every once in a while a stinker show is going to happen, I mean that’s the reality of life, but I think for us it’s few and far between.

The Owl Mag: Have you had any embarrassing moments at a show?

Toby Leaman: Haha, pretty much the whole show is embarrassing moments for me. No, I mean you do a lot of dumb stuff on stage, a lot of stuff you regret, you’re like “Oh I’m gonna do this awesome jump!” and then you end up looking like a chump or something, but there are a lot of time where, and we’ve played so many shows too, you get a lot of harebrained ideas, it always comes from a very good place though. It always comes from a place where it’s like “I’m going to get this show going to the next level, it’s gonna be fantastic,” and that’s always sort of when it fails. You know, when you fall down or you trip or when you whack yourself in the face, or when you hit somebody else in the face. I fall down enough; I think I’ve fallen down twice in the last couple of months. Yeah, you’re running all around, you’re just bound to slip, it’s not like you’re in a padded room.

The Owl Mag: When bands are doing really well, and have a big “following,” sometimes there can be a pressure on the band to deliver a certain kind of music. Do you ever feel this pressure, if so, how do you deal with it?

Toby Leaman: No, I feel like we’re pretty well defined, I feel like for what we are, just a band that does kind of what we feel like, we’ve never been held in any sort of genre. We’re just sort of a band that exists on our own terms. We do pretty much what we want, and usually what we want. We’ve never really put out an album that made us a smaller band, which I guess is a good thing. You know, you don’t want the same record over and over again. We’re also not the type of band that’s going to really go far away in our production values. It’s something we value versus what we do production-wise, and to us it’s what sounds the best.

The Owl Mag: Any musician alive or dead to jam with, who do you pick?

Toby Leaman: That’s a good question. It seems like, you know, I’m a bass player so it seems like I should pick a drummer. There are a lot of really good drummers who are dead. There are a lot of good alive ones too, we got one. I would really like to play with Topper Headon, the drummer in The Clash. I would have loved to play with him, he’s got some of the most fun ways to play the bass and you don’t have to think too hard about it either, if you can get your hand doing the right thing, oh I’d love to play with him.

The Owl Mag: How do you guys go about putting together albums?

Toby Leaman: We’ve always been a band that recorded songs well before we played them live. We started as a recording band and we’ve always recorded 20-30 songs before we ever played a show. And then when we recorded the other 10 or 15 songs, we started playing shows. We’ve always been playing catch up to the songs, and that’s sort of always the way we’ve done it. There’s always plenty of material, we love recording and we constantly want to have as much new material as possible for our own purposes. We try to record pretty much whenever we can, we don’t really practice, we just end up recording.

The Owl Mag: Could you talk a little bit about one you’ve written off of Be The Void?

Toby Leaman: I’ll talk about the first song on the album, “Lonesome,” that one was sort of a perception of sitting there being bummed out by your actions, and sort of embracing the idea of being lonesome. And so all the imagery like the train, the whistle, and the bird are probably things that would get people to weep and sort of wallow, and the song is just sort of they’re seeing these troubles that are preventing somebody from being lonesome. Yeah, you just want to be left alone. I don’t want to see the moon, I don’t want to see a bird, I don’t want to hear a train whistle, just leave me alone. Sometimes you just want to be left alone.

The Owl Mag: Do you remember a specific moment with the band that really made you realize that you’re going to be into music for the rest of your life?

Toby Leaman: Scott and I have always sort of been playing together. So it’s always just been a very slow and gradual growth. You know, he and I have been playing together for almost 20 years now, and we’ve always slowly grown, and grown, and grown. We had already been doing it and we were already going to do it no matter what, so it was nice to not have to work a day job anymore but other than that, there wasn’t some sort of earth shattering moment.

The Owl Mag: What is the first thing you find yourself thinking when you jump on stage and see all those fans waiting for you guys?

Toby Leaman: Oh man. I don’t know what other people do when they hit the stage, but I just try to get as relaxed as possible before going on. Or here’s what I try to do, and then when I get on the stage I want to immediately get that point across that “look, we’re not up here, we’re not precious, this is not like a precious thing you’re witnessing, these are real people doing their job,” and so I just want the band to come across as like “let’s fuckin’ do this, let’s get ready.” You just start pumping yourself up, getting psyched, and you’re just like “you know here we go, let’s hope we all hit the right notes and stay on beat,” — and that’s pretty much it, and it usually happens.

The Owl Mag: Anything else you wanted to say about your tour or any news?

Toby Leaman: We’re having an EP come out at the end of August, just some stuff that didn’t make record that would be worth throwing in there.