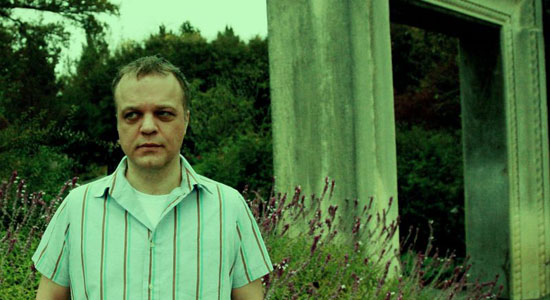 Crushed Stars (Todd Gautreau) is a music lover from his soul down to every pore of his being. Read about why his music, including his latest album In the Bright Rain, is better one on one. Find out how the psychedelic music of the '80s has driven him to create the dreamy, spacey ambiance that’s so big a staple of his work. Gautreau’s intense passion for the intimacy created by music is overflowing in tracks off In the Bright Rain. Read below to see a reason why music of any kind is so great in the first place.

The Owl Mag: Is there an overall theme to this album, In the Bright Rain?

Todd Gautreau: I thought it was a more optimistic record than the previous and a little brighter, a little more upbeat.

Todd Gautreau: I listen to a lot of different stuff. Where do I start? Psychedelic music was influential, also the turn of the mid '80s, post punk stuff, using guitars as textures and not just three chord songs you were used to hearing from rock bands. Just doing different things with guitars to create mood was something I saw in mid '80s and I think the stuff in the '80s took another dimension and made it more interesting, there were more emotions in the music.

Todd Gautreau: “Take Flight,” the last song, is a little different from all the others; it’s more of a mood piece. It’s a little slower and more atmospheric; it takes you on a bit of a longer journey than some of the shorter pop songs.

The Owl Mag: What is your process on song writing?

Todd Gautreau: I usually write pretty fast once I decide to start writing for a record; usually within a few weeks. I kind of record as I write and I keep putting over dubs on it; it all comes pretty fast. Sometimes it happens in a few weeks, then we spend the next few months editing the over dubs, I don’t really labor over the song writing a long time. When the ideas come I try to get them down fast. Once the first couple of songs are written it kind of tells me how the rest of the record is gonna go. The first song I wrote “Brighter Now” is a real pop song, once I got that sound, I wanted to write more songs like that, there are probably three or four. Once you get the burst of inspiration, you wanna flesh out a few ideas while it’s fresh.

The Owl Mag: Which part of making music do you enjoy most, the crafting of the songs or the actual performance?

Todd Gautreau: Crafting the songs, creating the mood with the instruments, I’m not really big on the performance. Sometimes I work with the producer or engineer, but I’m trying to create this mood or atmosphere and however I’m gonna get there. The end result is all that matters to me.

The Owl Mag: Where would you place yourself in the music scene?

Todd Gautreau: Yeah that’s difficult… indie-folk-pop I guess, kind of laid back to be called rock but it’s not as hard as a lot of stuff you hear on college radio these days. A lot of my influences are from the '80s and '90s, and I think that kind of comes through but I think sounds from that era are getting rediscovered right now, maybe people are discovering some bands that they didn’t catch the first time around. The more classical alternative stuff has been the influence. There are so many different schools within indie it’s really hard to keep up.

The Owl Mag: Are you on tour right now? If so, how are you feeling about it?

Todd Gautreau: I’m not real big on live shows. I have to put together a live band. For this record, I’m not really in a hurry to do it. The songs don’t really lend themselves to live shows. It’s more of an intimate listening experience. You kind of lose it with 100 people watching. It’s something that has to be listened to on your own. I try to create this half-awake half-asleep daydream-like state. I think the music captures that, just an escape instead of a party or an aggressive atmosphere.

The Owl Mag: What would you like listeners to get out of In the Bright Rain?

Todd Gautreau: I always try to make records that people are gonna listen to the way I used to listen and just discover everything, kind of find a bit of yourself in the song and a way to feel better about something. You feel like is applies to you, it’s a conversation with you and the record. It’s not dependant on a crowd scene or any kind of external force like that. Records have kind of always been my best friends. I wanted it to be comforting on some level. It’s definitely not a thing you’d put on at a party.