Bursting out from South Australia, it didn”t take long for Atlas Genius to leave the American music scene in a tizzy. Lambasting cliché, traditional pop band profiles, the Aussie-fronted band (currently featuring one northern Californian on bass!) carves out their own sonic groove in the vast pop-rock spectrum with hearty, synth-driven textures and candid lyrical disclosures. And when they get hearts pumping, it’s all anyone can do but stand up, shut up, and dance.

When they”re not neatly packaging sincere explorations of the human condition into four-minute morsels of audio, Atlas Genius has been touring. Constantly. (Lucky for us.) Wrapping up their touring with Imagine Dragons and Nico Vega following a brief detour to SXSW, we snagged frontman Keith Jeffery from backstage at San Francisco’s famed historic Warfield to chat. Fedora-d and polite as rock stars should never be, Jeffery recounts SXSW to The Owl, gushes about British comedy, and that other fab foursome of “geniuses.”

Keith Jeffery: So SX, well, we had never done it before and we knew that it was gonna be crazy, but I think it was crazier than we thought because on literally every street, whether it’s a café or a laundromat—it’s a venue. And so we were lucky that we had really good shows, we did like MTV and I Heart Radio, KCOW, and Warner Brothers—good stages—so even those were just crazy. You get there and it’s like go go go. You get like 10 minutes changeover, throw your gear on, and hope for the best. Sometimes the gig works, sometimes it doesn’t, but you just gotta play.

The Owl Mag: Were there any bands that caught your eye?

Keith Jeffery: We only got to see the bands on before and after us, so [I’d say] Tegan & Sara. I really love Tegan & Sara. I’ve always been a fan, so you know, getting to see a band that went on just after us on the same stage—that was nice.

The Owl Mag: Do you have any more festivals coming up?

Keith Jeffery: There’s a whole bunch of festivals, some of which we can’t announce. I don’t even know which ones have been announced, so I don’t want to say which ones they are and get myself in trouble! But there’s a whole bunch of summer festivals. [The Owl Mag note: they’ve recently been announced at Delaware’s Firefly Festival, the Bay Area’s BFD, and Washington’s Sasquatch Festival.] The Owl Mag: Very exciting. Do you have a favorite song to perform on this tour?

Keith Jeffery: It changes each night. I enjoy “Don’t Make A Scene” because each night it’s different—I never know quite what we’ll do, which is good. It keeps it exciting for us. And, “Trojans” is always fun, because everyone knows that song.

The Owl Mag: We were just at a bar like a block away [from the Warfield], and [Mike, the photographer and I] were saying, “We should probably walk over…” and then the bar

Keith Jeffery: And that’s always fun. It’s always great when people play your songs. A lot of people know the songs on the EP more than the album I’d say, so those songs are fun to play.

The Owl Mag: So you’ve been on tour a long time then?

Keith Jeffery: We had a 6-month break at Christmas. Other than that though…

The Owl Mag: Wow. So what’s your favorite American city to play in?

Keith Jeffery: We just came from Portland last night. We just had a show there, and every time we—we’ve played there four times—and every show has been good. We just have really great fans in Portland. I mean, it’s a beautiful city too. Very eclectic, great unique vibe, and we just love going there. The Owl Mag: Let’s talk influences. Rumor has it, you and your brothers listened to the Beatles a lot growing up.

Keith Jeffery: I still do. It’s one of those bands that you keep going back to. The more I know about music, the more I learn, the more I’m just completely in awe of what they did. It’s like you hear it when you’re young and think, “Oh that’s a catchy song,” and you don’t realize that there is absolute genius in there. Genius is an overused word—if only people didn’t have it in their band names [smirks]—but they’re just amazing. In seven years they wrote the best songs that will probably ever be.

The Owl Mag: That’s so true—so what’s your favorite album then?

The Owl Mag: Yeah, it could be released today and it would be just as relevant. Ok, let’s talk books. What are you reading right now?

Keith Jeffery: Right now I’ve been listening to an audiobook. I don’t know if you’re familiar with Alan Partridge? He’s [actually] a comedian called Steve Coogan. He’s been around for about 20 years or more, and he does characters. Characters? He becomes these characters. What’s the word for that? Impressionists? Meh. Whatever, anyway, he has this character called Alan Partridge who is this failed TV presenter. He just put out an autobiography of this fictional character, so I’ve been listening to that and it’s amazing.

The Owl Mag: Other than audiobooks, what is your favorite thing to do on tour, time permitting?

Keith Jeffery: Going for a run. There are

so many cities, buses, and trains, that getting to run is just…essential actually.

The Owl Mag: Have you run through San Francisco yet?

Keith Jeffery: No, we just got in this afternoon and we’re still exhausted from SXSW. Maybe in a couple days.

Keith Jeffery: But good. Are you a runner?

The Owl Mag: Yeah, I actually have the winged tattoos of Hermes on my ankles actually.

Keith Jeffery: Have you? Haha. The Owl Mag: Alright, back to you. You have two brothers in the band?

The Owl Mag: Do you ever play pranks on each other? Like get into brotherly shenanigans?

The Owl Mag: No? I don’t believe that.

Keith Jeffery: No, we’re not that kind. We’re the kind of brothers that get on really well but we, being brothers for a long time, we got that out of our system when we were really young. The prank I remember, the worst one apparently, I pushed my brother off a slide and he broke his arm when we were young. I don’t remember this, but he tells me that he did.

The Owl Mag: How old were you?

Keith Jeffery: Maybe 8? 10? Not sure. Is that a prank or is that just beating him up?

The Owl Mag: That’s just the brotherly thing to do. It is what it is. Speaking of shenanigans, I read that you guys dedicate your show to one woman, like a female actress?

Keith Jeffery: Well specifically what it is, is like generally actresses from the “80s or “90s, just because it keeps it light. It’s a funny thing, and it’s gotten to this point where whoever can come up with the most obscure actress wins and that’s who we dedicate the show to. It’s just a way of getting us in the right mood to go on stage, so it’s not too serious.

The Owl Mag: So who is tonight all about?

Keith Jeffery: I’m not sure, I hadn’t thought about it. We’re kind of getting to the point now where we’re starting to recycle. I actually don’t know that many “80s actresses. Maybe Phoebe Cates from Drop Dead Fred. [Laughs.] That’s who we might dedicate it to tonight. I think she married um, who was it, A Fish Called Wanda? Kevin something. You know the guy? I don’t know, Phoebe Cates. See, that’s obscure.

[Imagine Dragons’ Dan Reynolds loudly coos with his newborn across the table, swinging the baby, baby is smiling].

The Owl Mag: Haha. Touring with these guys, you must have some good stories. Any good ones come to mind?

Keith Jeffery: Well, Imagine Dragons have a band writer that every night writes down the drinks they want, the food, etc. [for the venue to prepare at the next show]. And we all have that. And on those, they’ve always [written], “a monkey butler.”

Keith Jeffery: Yeah, “a monkey butler,” as a joke. And it never arrives of course. Except a monkey did arrive, in Chicago. The promoter brought in a monkey. I’ll show you a photo. So we had a monkey, and she was goooorgeous. Her name was Mindy I think. [Shows me a picture on his phone.] 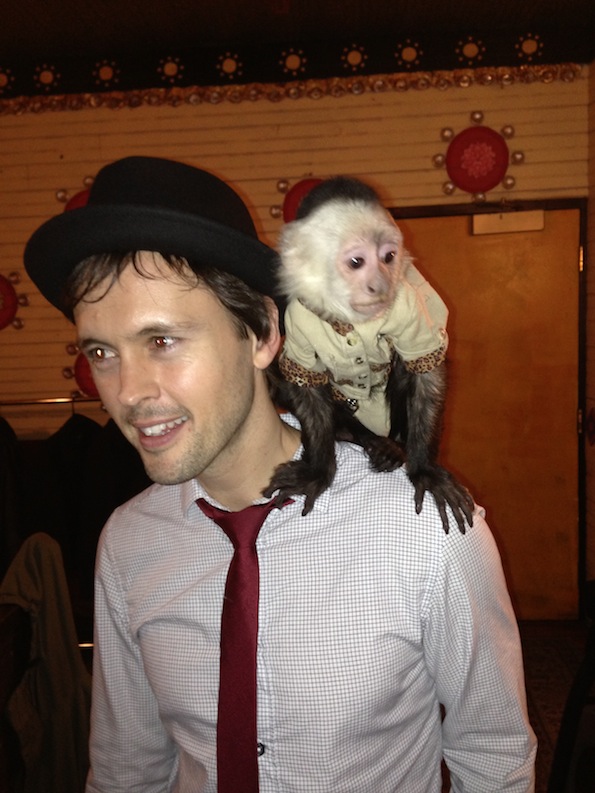 Keith Jeffery: So that to me is the highlight of this tour. I’d never been close to a monkey, and she was like throwing my hat off.

The Owl Mag: Ha! Sorry San Francisco disappointed you with no monkey!

Keith Jeffery: Yeah seriously, where’s our monkey? That was pretty cool, I’m happy with that.

You can check out the review from that night HERE. And all the photos from the interview HERE.