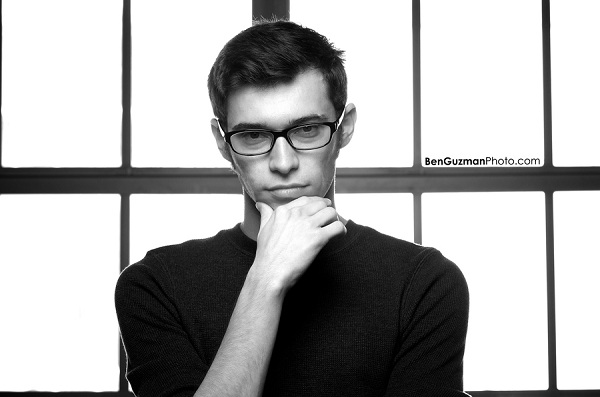 Steve Vaynshtok has been slowly but surely making a name for himself within these last few months under his alias AbdeCaf and with electronic music gaining so much popularity lately, it seems like he’s come onto the scene at a perfect time. The future holds a lot for this young student/producer and us over at The Owl Mag have certainly become fans of his. So of course we were stoked when he approached one of our editors about an interview. We chatted with him through email about the upcoming Veld Music Festival, his hobbies when he’s not making music, future collaborations that he’s got in mind, and a lot more.

The Owl Mag: What influences you as a producer and how would you describe your music to new listeners?

Steve Vaynshtok: That’s a tough one. I’d have to say my experiences definitely dictate the mood/overtones of my songs, but at the same time other music has a staggering influence on my own. I listen to so many great artists that it’s hard to not be influenced by them. Music is a huge part of my life, I’m listening to music almost every minute of the day, when I can. I like to use the term Tasty Jams to describe my music. Whenever people ask, I just tell them it’s my emotions in waveform.

The Owl Mag: Name a few hobbies that you have apart from making music.

Steve Vaynshtok: I love movies; I watch a lot of movies whenever I can and I do this thing that no one does anymore called reading books. It’s a shame that in the age of iPads and Kindles people don’t read physical books anymore. I have a 1st edition Man’s Search For Himself by Rollo May from 1953 and it’s got to be the greatest thing ever. I also play a lot of video games. Anything with a good story and open ended gameplay makes me happy. I love all the Grand Theft Auto games, Red Dead Revolver (and Redemption), Bioshock, the Diablo games, the Tekken games, the Street Fighter games, Super Mario games, the Max Payne series, the Dead Space series, the DOOM games, the Quake games, Painkiller, Serious Sam, Devil May Cry 1, 3 and 4, Kingdom Hearts 1 and 2, the Hitman series, Limbo, inFamous, the Resident Evil series. I like anything that lets me brutalize monsters and feel badass.

The Owl Mag: You’re on the roster for the Veld Music Festival along with big names like Deadau5, Knife Party, and Steve Aoki. Will this be your first time playing for a festival crowd and who are you most interested to see while you’re there?

Steve Vaynshtok: It definitely is my first festival, but it’s the first of many. I’m pretty hopeful to have a full festival run next year, fingers crossed for that. I’m pretty excited to see Steve Aoki, Knife Party, Deadmau5, Avicii, Mord Fustang, and DVBBS, I’m not really a fan of EDM so I’ll very likely be watching everyone’s set there. I wanna familiarize myself with more electronic stuff and broaden my horizons.

The Owl Mag: As far as directors go, Tim Burton or Wes Anderson?

Steve Vaynshtok: Wes Anderson all the way. I love his films and I can’t even think of one Tim Burton film I actually enjoy.

The Owl Mag: When you’ve got an idea for a new song do you just sit down and get to it or do you have some sort of process?

Steve Vaynshtok: Well, when I get inspired I sit down and lay a groundwork, and depending on how hard that inspiration hits, I either sit there all night fleshing it out, going through countless mixes and edits until I find the perfect balance for that song, or I start it and let it sit for a week or two while listening to what I’ve got over and over, til more inspiration strikes.

The Owl Mag: Do you have any pre-show rituals to get you psyched before you go on stage?

Steve Vaynshtok: I eat a living baby whole. But, if a baby isn’t available, I’ll settle for a small woodland creature to varying degrees of cuteness. Nah, I don’t really have one, my ritual is just — mentally prepare myself for the best show I can put on, and then put it on.

The Owl Mag: What albums have you been listening to lately and are there any upcoming ones that you’re particularly excited to hear?

Steve Vaynshtok: I’ve been jamming to Clams Casino’s new mixtape and his B-sides. Jamming to a bit of Crystal Castles second album, the new Marina and the Diamonds album was dope. The new Hundred in the Hands is awesome. I’m pretty excited for Aesop Rock’s next album Skelethon and for Millionyoung’s next album. I love his stuff and he’s even letting me do a remix of one of the tracks, so I’m more than excited for that.

The Owl Mag: Do you have any other projects going on aside from AbdeCaf or are there any in the works?

Steve Vaynshtok: I’m definitely focusing all my time on AbdeCaf, but I think I’d like to start a post-rock project. It’d be a band like Tycho but with more Explosions in the Sky dynamics — lots of climaxes and crazy drops. It’s something I’d really like to explore but I don’t know any open minded, talented people who are reliable.

The Owl Mag: How would you describe your experience when you opened for Com Truise back in February?

Steve Vaynshtok: Seth was a really cool guy. We exchanged a few emails and got to chat a bit at the venue, but we didn’t really get to kick it like I would have wanted. He was great though, he killed it so hard. I think watching him destroy that venue made me want an APC40. His set was really good. I, on the other hand, had a less than capable sound engineer who couldn’t get my interface to work so I had to go direct into my laptop and the sound was shitty. I only played 4 songs because of the shame in my heart and also because at the time I only had 4 songs.

The Owl Mag: Are there any producers/artists in general that you’d like to collaborate with at the moment?

Steve Vaynshtok: Kanye West and Clams Casino first and foremost, then of course Drake, The Weeknd, I’d love to work with Travis Barker too. His drumming is something else entirely. This is a tough question because I’d love to work with everyone I listen to. Aesop Rock, Millionyoung, SBTRKT, xxyxx, Diplo, Koda, Alice Glass, lots of people, it’s a list I can never remember the whole of when this question arises.

The Owl Mag: Can we expect another EP to drop sometime in the near future or is that on the down low right now?

Steve Vaynshtok: Absolutely, the next EP Rebuild is already in the works, I premiered two songs from it already. It’s dropping in September via Fluorescent Records and then I’m following it up with another EP in November or December, depending on how hard my work ethic is. There will be 3 of them out in 2012 and then a full length in 2013 if I can get some label interest (because I don’t see the point in releasing a full length without a label behind it). Also, because I’d need funding to get the guest spots on it that I want, and get the quality of sound and mastering that I want. The full length really has to blow doors off of walls.