By The Numbers: Vanaprasta’s Journey to “Nine Equals Nine” 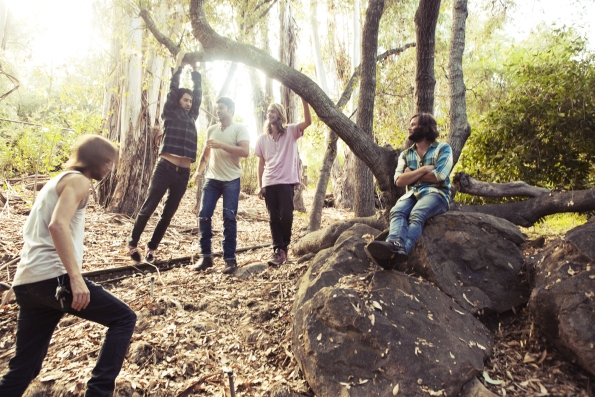 Los Angeles, specifically Silverlake, has a jewel of possible epic proportions within its indie enclave called Vanaprasta. Steven Wilkin (vocals, synth), Taylor Brown (bass), Collin Desha (guitar, keys), Cameron Dmytryk (guitar, sleigh bells), and Ben Smiley (drums) are five diverse elements who, for almost three years, have been diligently cultivating a dynamic, oft-cosmic rock sound (and fans to go with it) while trying to figure out who they are as a band. With their debut album Healthy Geometry on the way, its first release “Nine Equals Nine” is an assured sign of the band’s confidence in their growth and the possibilities.

The first time that I heard “Nine Equals Nine,” it’s safe to say that I wasn’t ready for it, yet I welcomed it. Actually, first I mentally said “WTF?” and then I welcomed it. While they’re notorious for genre-blending, as one song can source anything from Kings of Leon to Led Zeppelin, this song is something of a departure. From the esoteric lyrics to the instrumentation to its ode to R&B, there was much about the song that emotionally shoved me around.

I was contemplating suing Vanaprasta for battery, but until the lawsuit works its way through the court system, it seemed damned logical and right up my alley to dig a bit further into the song and its genesis. In the vein of motivation, stimulation, and inspiration, sometimes the unlikeliest of moments or events can be the impetus for something dynamic…in life, in love, in music. One such moment led to “Nine Equals Nine.”

So I called Steven to get the scoop. After a couple of call attempts, assurance that I was not a bill collector (no, seriously), and him locating the sweet spot in his home for phone reception (God bless you, AT&T), it was smooth sailing.

Back home in Utah, a good friend of Steven’s was in an accident. Bad. Thrown from his bike, bad. Paralyzed, bad.

“As you look down at the darkness, time was now in motion.
And there was no anticipating what was waiting there for you”

“He had been ejected from his bike and thrown out and shattered his vertebrae in his neck, and was paralyzed instantly.” Steven recalled. “I just woke up one morning, kind of in between sleep and awake, and just started writing all of these words down that were just coming to the top of my head kind of about this whole experience and maybe me being in his position. I wasn’t trying to write it too literally with the lyrics, but I just wanted it to be more about that experience.

“You were chosen in a moment and the moment had chosen you, yeah.
And in a struggle to ignore it, it was then you finally knew, yeah.”

“So I went to the guys and said, ‘Hey, I really want to go into the rehearsal space and I want to try something that we’ve never done before.’ It doesn’t even have to be Vanaprasta-related, it doesn’t even have to be a song that we consider, but I just want to go in there; I don’t want anybody to touch their regular instruments. I want to pull out synthesizers, I want to pull out computers, I want to pull out samplers. We just kinda started in with this jam and just kind of let it happen and flow and before we knew it, we were all falling in love with this amazing soundscape that we started to create which was the music for ‘Nine Equals Nine’.”

Steven speaks with a certain reverent clarity in describing the song’s falling into place and the band’s strong desire to record it. Unlike their usual mode where they take on a song by recording it live, the approach to “Nine Equals Nine” contrasted greatly to the point of being calculated, almost mathematical. The sound that you hear is an amalgamation of Steven, Collin, and Taylor on synthesizers, Cameron on a sampler, and Ben manning percussion with a SPD-S pad: not a traditional instrument in sight. As emotion-born and free-flowing as the song began, creating it was an exercise in precision, yet the end result is something soulful, warm, mystical, and rich in feeling that has resonated with practically everyone who has heard it.

As I already had preconceived notions about Vanaprasta regarding the band name, the song title, numbers, why my ears lean towards them, etc., nothing that Steven said really surprised me; instead it served to make me smile, see a little deeper, make sense of and reinforce what I thought I already knew which was that there were extraneous influences working on the band. For those who believe in the power of numbers, patterns, or shapes, Vanaprasta seems inherently aware of the ones that follow them, perhaps even guide them.

“There’s a theme of the number that’s been coming up over and over throughout our music and throughout our experiences. Wherever we go there seems to be this connection with 3, 3, 3 or 9. And when we were playing the sample of the song that you hear at the beginning, Cameron [guitar] blurted out ‘It sounds like it’s saying nine equals nine.’ And that was it. It played into the whole experience of the record with nine songs, Healthy Geometry, ‘Nine Equals Nine.'”

The ability or willingness to create out of the experience seems like a simple task, but it actually takes effort. Effort as in observing, recognizing, and accepting rather than, say, dismissing. Over the years, Vanaprasta has paid attention to certain nods from the universe that seem to continuously weave themselves into their lives.

“There’s been so many serendipitous moments with that number [9] throughout our whole career as a band that it seemed fitting.” Steven noted. When heading to Portland on their first attempt to record an album, they hit the road in 3 cars with 9 people. Certain show dates that they’ve played have added up to 3 or 9. The band logo and Healthy Geometry’s cover art are constructs of triangles.” I think as an artist you have to allow yourself to be open to the message and be that receiver to express it. So the pattern has definitely been there.”

On 11/1/11, Vanaprasta’s Healthy Geometry, will officially be released into the atmosphere and the decision for “Nine Equals Nine” to be the opening track should be taken as the band’s collective faith in its potential and interpretive impact upon the listener. Steven certainly thinks so.

“The frequencies of the synths really paints a broad perspective of the soundscapes of music you’re listening to, and you can kind of allow yourself to be lifted into a different world and experience that. I do think ‘Nine Equals Nine’ lends itself to maybe being what Vanaprasta could potentially be in the future.”

FYI, that friend of Steven’s wound up walking out of the hospital under his own strength.