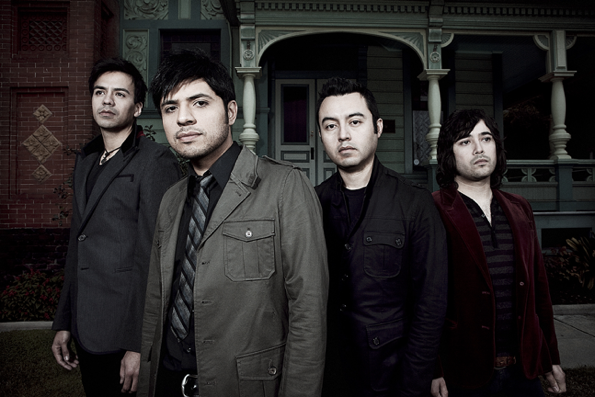 Truth: One of the best things about music is the unpredictable nature of it. You know, when it renders the pleasant surprise or the unexpected upon you. It may not be politically correct to point out why The Tender Box walk that “unexpected” line, but I’m going to do it anyway and then we can move on.

A band of four Latinos from East L.A. is not who you really expect to hear and see completely embrace (and wonderfully master) the style and sounds of synthy rock a-la the ’80s or the shine and sheen of Britpop (Happy Mondays or The Cure, anyone?), but there you have it. They listened to it, grew up on it, loved it. Granted there’s the huge Latin Morrissey fan base, but that’s a phenomenon that even Moz himself finds difficult to explain. Breathing some healthy fresh air into the Los Angeles music scene, Joey Medina (vox/guitar), Chuck Gil (drums), Raul Martinez (guitar), and Steve Mungarro (bass) are The Tender Box: friends, fans of that true post-punk sound, and makers of said sound. The only real difference here is the air in the songs; where your typical Manchester band might sound as if they were drowning in their worldly sorrows, The Tender Box thrive on well-crafted danceable indie/alternative beats that sound anything but dreary, yet faithful to their sonic roots. What of their Latin roots? See their ace track “Signs of Fire” and its Spanish cousin/version “Fuego Lento.”

Having pulled tour support duty with The Goo Goo Dolls, She Wants Revenge, and scored with having their single “Mister Sister” picked up for licensing with Chevrolet, The Tender Box is making a good noise that’s capturing many ears. The last time I saw them was their terrific set at The Viper Room; the next time you can see them is this Wednesday at The Roxy in LA and then Friday at the Rickshaw Stop in San Francisco.