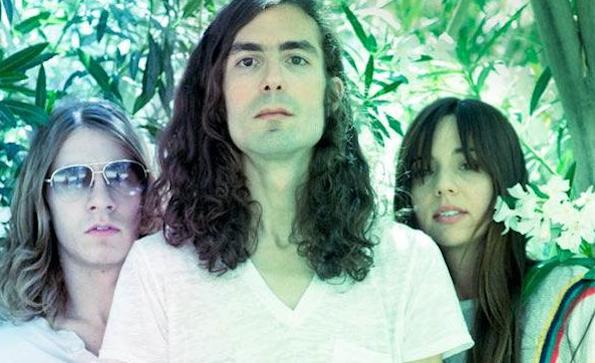 Ahhh I just love the smell of a musical acid trip in the morning, don’t you?

The heady realm of blues and riff-heavy social psych-rock is the Earthly playground for rock messiah, Guy Blakeslee and his partners in badassery, Derek James and Paz Lenchantin, of Los Angeles’ The Entrance Band. Hearing the recorded goods is one thing – a good thing – but this band’s kinetic force thrives in the live where Guy virtually shreds his guitar parts (hey, he’s a lefty!) with virtuosic abandon, reverb, and effects. Good God. And the rhythm section? Hot damn. James is the epitome of a rock-anchor man; tight and lean with his beats, but be ready to land somewhere between awe and turned on by Lenchantin on bass. Formerly of A Perfect Circle (and an ill-fated project with Billy Corgan, but never mind that) the lady throws down a sonic low end that’s ridiculous complete with rock star stances, high heels, and an occasional crowd surf. She’s not a great bass player for a girl; she’s a fucking great bassist, period.

If you’re in the LA area in the month of March, you’re in luck because The Entrance Band has just begun their month-long, Thursday night residency at The Satellite.