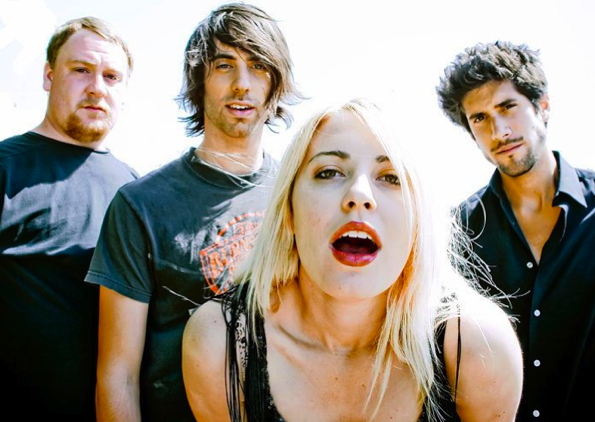 Once again I regale the tales of a female-fronted band: a band not of pop, but of rock and force and presence.

To the naked eye, Lauren Little (vox) of Los Angeles’ Queen Caveat presents a typical California girl picture, but put her on a stage with her three band mates and the petite blond becomes something musically maniacal and sexual, delicate and vulnerable, goofy and unpretentious. Vocally, Lauren shape shifts from a dynamic bellow to husky coos, singing their darkly passionate and often sexually charged lyrics with her physical body almost as much as with her voice. Surrounding her are Ben Epand (guitar), Will Weissmann (bass) and Jesse Magnuson (drums), all of whom compose a band making aggressive yet melodic rock music with a leading lady who’s no delicate flower. Ben takes advantage of, but doesn’t overuse, effects and pedals to make intelligent noise on the guitar, and Will’s low-end theory on bass is all about flexible and juicy bass lines. He plays a five-string; for some reason, I find that fascinating.

Queen Caveat has just returned to LA-land from a fantastic adventure at SXSW where they kicked many an ass (mine included) and made many a new fan with their (multiple) powerhouse performances. And they also do a pretty solid cover of Rage Against the Machine’s “Killing in the Name”.

There’s an additional visual entertainment factor courtesy of Jesse on drums: the guy’s rather fond of face paint around the eyes while beating the sh*t out of his kit.

In My Bed by Queen Caveat