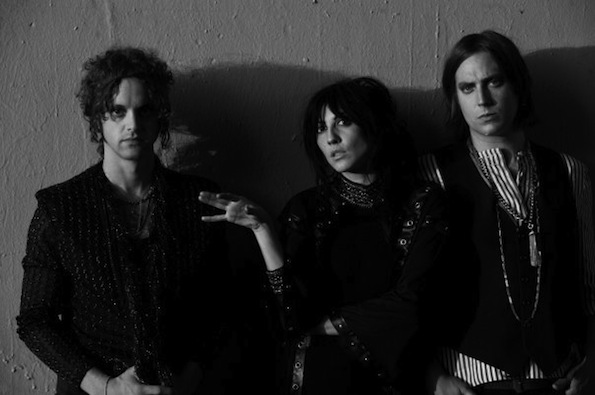 It’s that time of year again in Los Angeles/West Hollywood: The Sunset Strip Music Festival is upon us. Leading up to the huge street festival action on Saturday, August 20th (this year’s honoree is none other than Motely Crue) are two days of showcase events at Sunset Strip venues. On Thursday, August 18th The Roxy Theater will get owned by Nico Vega.

Nico Vega is unique. And by “unique” I mean that they offer me something musically, lyrically, and emotionally out of the ordinary that is a challenge or an outright gift. A three-person outfit in basic structure: singer (Aja), guitarist (Rich), and drummer (Dan). Huh? No bass? WTF? That’s my usual reaction to such things because I’m so, so fond of that undertow, that lower level, but if I get my expectations and pre-conceptions out of my ass, then I’m able to appreciate what’s given. In truth, at first listen to their music you won’t even notice the lack of bass for their sound is quite full. One guy makes progressive, textured, and gentle melodies that hook with six strings, the other guy frames one hell of a riot with dangerous authority without assaulting you.

Front woman, Aja (pronounced “Asia”) brings her soul to the stage sans footwear, is a ball of restrained/unrestrained solar energy (which I figured to be the case the first time that I heard her vocals; the only adjective that came to my head was “striking”) and there’s a tribal/political/social and loving tone to their songs which are a blend of rock/dance/blues/folk/soul. Lyrically they are bullies; pushing you, the listener, challenging and daring you to seek higher, to “do right” after plumbing the depths to unearth some human truths. Artifice and pretense are replaced by authenticity and passion; the kind that’s as spiritual as it is unabashedly carnal. Aja’s voice is thick and bellowing, something between the likes of Bjork and Grace Slick, rich with character coming from that tiny body of hers and feels like a balm to soothe any wounds that any uncomfortable soul searching may have caused, but when the angst wants to rip, look out. Between Rich’s aggressive sonic shifts covering lead guitar to bass effects, and Dan’s primal percussive domination, seeing them live simply seals the deal, as they are far more than just another band with a pretty girl out front exalting her girl power. For a band of ‘merely’ three, they speak to and for the masses of you and I, he and she, us and them. No one walks away from a Nico Vega show untouched; by the end of the final song, you are one of them.