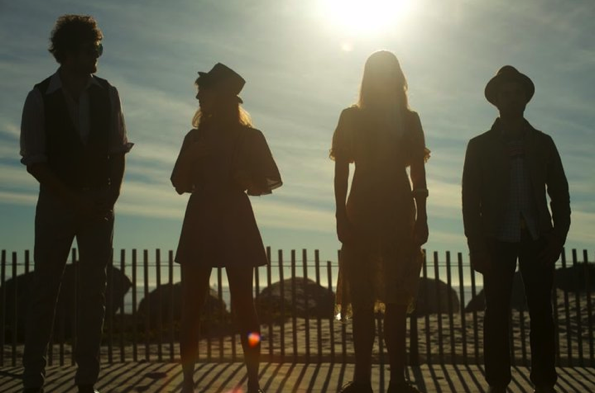 What do you make of a band where a tap dancer serves as a percussion instrument? Well, welcome to He’s My Brother, She’s My Sister who are tapping (no pun intended, honest) into the feel-good charm of folk and blues with accents of the west and ragtime swing. And vaudeville. Waitâ€¦ what?

It may seem kind of weird, but I guarantee that upon first listen at least one part of your body will move to the catch of their jangle.

The band name is damned literal: Robert (vox/guitar) and Rachel Kolar (vox/percussion) are brother and sister and the vocal duo of the band while a darned lovely Lauren Brown steps and stomps quite lively upon an amped box for all the world to “ooh” and “ahhh” at providing an artful edge and grace to the art of percussion. And hey, look; she’s also playing the bongos! For an outfit in its rather infantile stages and is actually an offshoot of Robert’s other band, Lemon Sun, the songs are rich and picturesque, old fashioned and modern and tend to draw upon influences of old like The Mamas & Papas as well as current musical kinsman such as Edward Sharpe & the Magnetic Zeros. No, you were not imagining that you saw them on tour with Edward & company last year.

Hey Los Angeles, the month of May will be your opportunity to indulge in the feel-good on a weekly basis: He’s My Brother, She’s My Sister have a month long residency in hipster-central: Silverlake venue Spacelaâ€¦uhh, The Satellite. Bring your dancing shoes! Or tap shoes, if you have a pair.