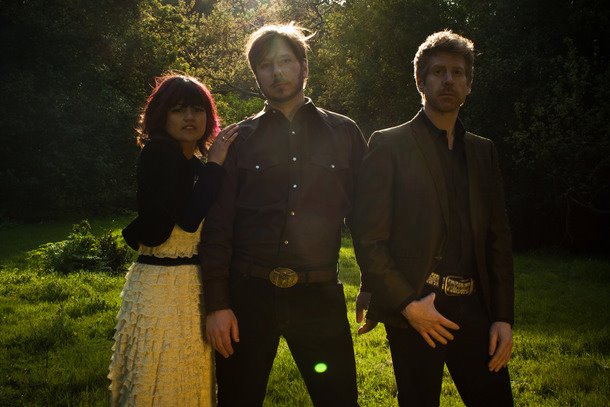 For fans of Captured Tracks, Northern California’s Sentinel are a trio composed of bassist/vocalist Tarabud, guitarist Dennis Bestafka, and drummer Billy Mowery. Creating a beautiful and effervescent take on dream pop inspired by the legendary forebears of U2, My Bloody Valentine, and The Smiths, this band, active since 2000, have numerous albums and singles to their credit. Utilizing a lovestruck New Romantic aesthetic that hasn’t been in vogue since the glory days of MTV combined with the icily beautiful songwriting and vocals of its lead singer, it’s a treat for those who think 120 Minutes isn’t enough.

Based out of Oakland, they’ve been busy playing shows in their native Bay Area lately. Since their first self-released album in 2004, they’ve released a consistent stream of albums and singles. Their latest, last year’s Somewhere Else, is a shimmering delight that demonstrates it’s not just pensive mood music; they have a knack for synthesis, as evidenced by the New Order-ish synths and danceable beats. Make a spot for Sentinel on your next playlist (or more appropriately, mixtape…the kind you have to rewind,
preferably in between an Echo and the Bunnymen B-side and a Beach Fossils track).