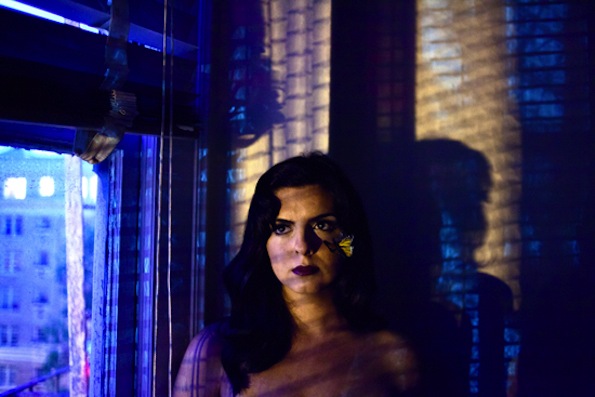 As of late, Maryam Qudus, aka Doe Eye, has been busy blowing up beyond the Bay Area music scene. Since sending her single, “I Hate You,” from her 4-track demo Run Run Run to San Francisco’s LIVE 105 in 2011 and having it immediately added to the LIVE 105 rotation by Program Director Aaron Axelsen, Doe Eye has been recognized as Fuse TV’s “Unsigned Artist of the Month” in October 2011, chosen as one of LIVE 105’s Top 20 Bands of 2011, selected to compete in Billboard’s 2012 Battle of the Bands representing the West Coast, recently featured in an article on the MTV Buzzworthy Blog, and the list goes on. So, all this recognition begs to ask the question, why has she not been signed yet? If hard work has anything to do with it, then Doe Eye should be signed any day now.

With the September 2012 release of her 6-track EP, Hotel Fire, which was produced by the beloved Bay Area producer, John Vanderslice, Doe Eye once again showed her fans and everyone else that she not only has the talent to keep putting out sensational songs, but also the desire to stay true to her sense of what of makes her music intriguing while keeping her brand of indie-rock exceptional. Throughout her Hotel Fire EP, Doe Eye is not afraid to put herself out there for the world to look at, judge, and ultimately, fall in love. In fact, she is putting herself out there even more with her new video for the title track, “Hotel Fire,” which premiered on the MTV Buzzworthy Blog on Tuesday, February 26th.

On stage, Doe Eye exudes the confidence of a music legend while pouring her passion into every word and note. See her perform on Thursday, February 28th at Bottom of the Hill as part of the Noise Pop Festival. Tickets can be purchased HERE.

Check out the EP’s title track and her song that threw her into the spotlight: