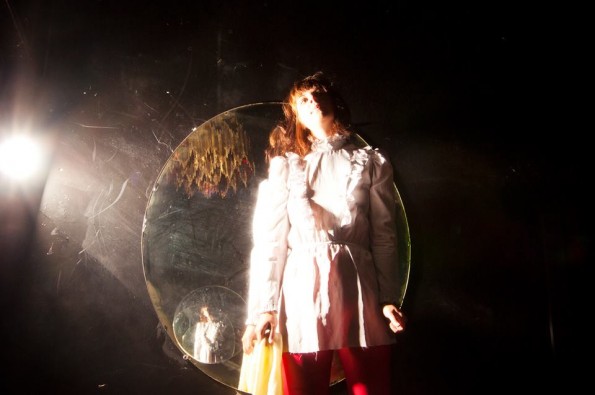 Currently based out of Austin, a girl by the name of Emily Beanblossom has put together a group by the name of Ruby Fray to create music that doesn’t quite have it’s own name, but falls somewhere between psychedelica tinged folk rock, chamber folk Americana and ghost-y eerie folk-pop. It’s lovely and haunting and melodic and a little bit spectral.

Songs from Ruby Fray’s debut album, Pith, display a wide range of arrangements and creative song-making. “And The Moon” loops a steady drum machine beat under the sinister twanging of strings and later track “Closed Eye” is gentler and mournful with hazy guitar backing and yearning gorgeous vocals. “Let’s Grow Older” is dark razor edge of menacing vocals and ever so slightly erratic riffs disguised beneath the veneer of a slow and quiet introduction. Latest single “Barbara” shows Ruby Fray
losing none of their Maxines-like songwriting skill while veering into the psychedelic more yet not losing the touch of darkness and danger.