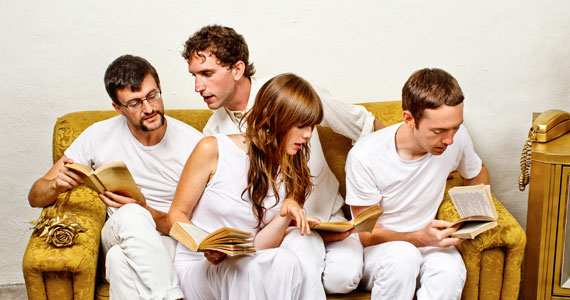 Portland produces indie bands the way Silicon Valley manufactures high-tech wizards— that is to say systematically and often. We can now add Portland’s Lost Lander to that enviable roster.

Lost Lander is the outfit founded by songwriter Matt Sheehy, a seasoned musician whose CV includes Gravity & Henry and The Menders. Debut LP DRRT was the result of his felicitous partnership with producer Brent Knopf, whom he met through his work as guitarist for Knopf’s project Ramona Falls. (Knopf also formerly lent his talents to Menomena as vocalist/keyboardist.)

Sheehy’s once solo project has since been rounded out into a quartet— thanks to Dave Lowensohn (bass), Patrick Hughes (drums), and Sarah Fennell (keys). The result? An immaculately polished debut. DRRT is constructed from shards of electronic and organic sounds—at once lush and luminous but executed with militant precision. The terrain is textured yet accommodating (vocals obligingly make room for hushed synths on DRRT). In any of the eleven songs, you can easily divine the influence of an early Peter Gabriel, Fleet Foxes, and The National.

Yet nothing else from Lost Lander’s rigorous output can match the orchestral majesty of its tour de force, “Afraid of Summer.” The haunting rhapsody features a multitude of sounds—springy staccato violin strokes, twinkly keys, waves of tribal percussion— all of which could easily devolve into chaos if they weren’t tempered by Sheehy’s serene voice and reined in by Knopf’s disciplined approach (“Afraid of Summer” reportedly underwent 100 edits). In his painstaking production, Knopf wields the command of a philharmonic conductor.

But on several other tracks (like opener “Cold Feet”) Lost Lander delivers a sound that is as spontaneous as it is methodical—which is exactly what endows this quartet with its hypnotic verve.

DRRT is on now on sale and Lost Lander is currently on tour.