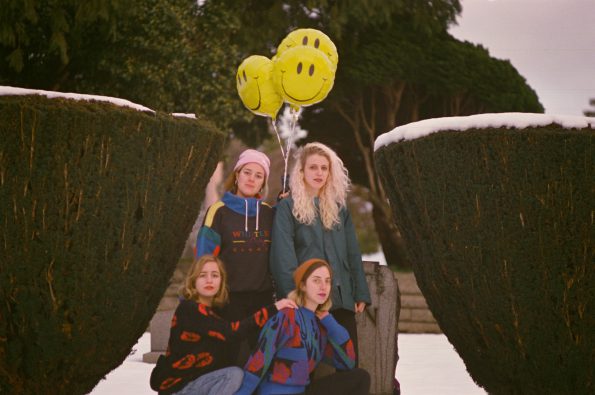 Seattle’s Chastity Belt continues to evolve on I Used To Spend So Much Time Alone, their third LP. As on previous efforts, Julia Shapiro carries the bulk of the songwriting, though Gretchen Grimm does weigh in with “Stuck.” It’s a darker, more interior vibe that predominates here, as evidenced by the woozy “Complain” and “Something Else.” There’s a moment on opener “Different Now,” where Shapiro reels you into her desolate journey, and then the band comes in as a singing Greek chorus to lift the weight, as friends do. Personally, we can already predict that when things go south at our day job, we’ll be pacing around singing the quietly defiant “What The Hell.”

What was most eye-opening about their last LP, Time To Go Home, and their live shows from that time, was the sense of the band coming together musically and finding its own language. The new LP further refines this, (the magical “Caught In A Lie”), with its unexpected bridge taking off in a goose bump-inducing direction, speared by Annie Truscott’s wandering bass. “Used To Spend” works so convincingly as a summary of all that came before, both thematically and musically, that it fakes your brain into thinking that it’s the final track. So, being Chastity Belt, of course they blow up the template and tap into their inner Sonic Youth with the jaw-dropping closer, “5am,” where the interplay of guitarists Lydia Lund and Shapiro distort your mind. If you’re in Seattle or Spokane, release shows are coming up, otherwise track them across America, and note that they’ll return to the West Coast in late July and early August.

I Used To Spend So Much Time Alone

is now streaming over at NPR’s First Listen. Click here to listen.
login