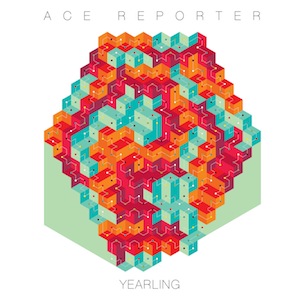 There is no such thing as a dry spell for Chris Snyder. Since the completion of 2010’s threesixfive project, wherein the wispy-voiced overachiever wrote one song every day for a year, he’s been recuperating and conceiving his proper foray as Ace Reporter. On a 2011 release, he’d be grasping at straws like a musician twice his age. Putting the breaks on Yearling has paid off, allowing Snyder to inject his material with beguiling textures and bits of memory that empower his temperamental debut.

The rhythm section is superb: Aaron Steele’s drums snap and bounce on “Collective Works” just as the thick bass of Chris Kuklis buoys lead single “Untouched & Arrived.” Keyboards tie it all together, propelling the chorus of the dance-rock pre-elegy “Arcadia” and reverberating over the Bon Iver-ish “Bronze” as Snyder sings, “I know what it means / to see the future lingering / as if in a dream.” It’s a genuine statement, especially since so many of his dreams are tortured ones. Just look to the scathing “Guilttrip” for proof.

Yearling takes alterna-pop and washes it in rain-soaked experience. Perhaps Ace Reporter wishes he’d grown up a little more slowly, but then, when you’re writing a song a day, all that self-reflection ages you. We can hear it in his music.