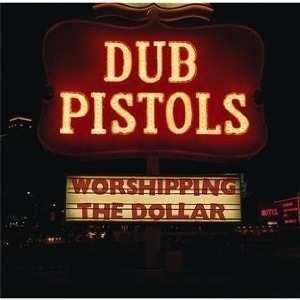 Dub Pistols are a London act with song credits in successful (Tony Hawk’s Pro Skater 2) and not-so-successful (Mystery Men) products. They eluded big beat backlash by continuously touring and doggedly adhering to their old school dub meets new millennium teen comedy soundtrack style. Worshipping the Dollar is a timeworn re-hash that makes us wonder how they made it to album number five.

Every song is reminiscent of a superior recording. “Alive” is to Groove Armada’s “Superstylin’” as Gus Van Sant is to Alfred Hitchcock. “Gunshot” is one of four indistinguishable tracks that further tarnish what reputation jungle has left. Dub Pistols rely heavily on a torturous echo chamber of ska horns, making Worshipping the Dollar seem longer than it actually is.

The quasi-topical “West End Story” finds guest Akala pondering, “is the world not one big slave ship… all your freedom is written on your pay slip.” But bulk of the content is squandered on sludgy party non-starters. Aside from the twelve-second dubstep fake-out on “Bang Bang,” the closest thing to a highlight is the bouncily innocuous (and thankfully hornless) “Rock Steady” featuring Rodney P and Lindy Layton, winning Most Likely to Appear in a Video Game by default.