ALBUM REVIEW: “Who’s Who In The Zoo” by Yourself and the Air 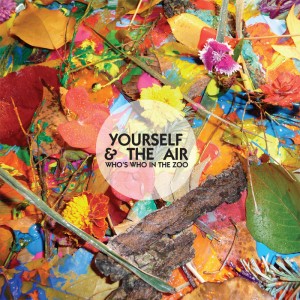 Yourself And The Air is an aptly named band with a swirling, atmospheric presence that is hard to resist. Somehow flying under my radar for the past few years, their latest EP Who’s Who In The Zoo grazes the tip-top stratosphere while keeping their lyrics grounded in Midwestern suburban themes. I could say something about how they’re a “blimp” (in a good way) in your record collection after you hear them, but that would make this extended metaphor super-hokey. (That doesn’t make it less true…or less fun to say blimp.)

The Chicago-based band is comprised of Erick Crosby (lead singer), Drew Rasmussen, and Jeff Papendorf. Instrumentally they’re a textured sonic pulse that’s not  unlike The Album Leaf during their contemplative moments, but also like Explosions In The Sky with that omnipresent guitar build-up that slinks and reverbs forth. They also have this psychedelic thing going for them, kind of like Animal Collective or The Antlers. Crosby’s voice brings you back to the early ‘00s when adolescent falsetto angst was in, but he thankfully cuts out most of the angst.

The stand-out song for me is “Bicycles Plus.” They bring in a harmonica for the first part of the song, but then transition into a slow crescendo of synth, snare and kick drum, and harmonious “oohing” back-up vocals, not to mention full-reverb guitar awesomeness. With lyrics like “I’m going to color outside the lines while I still have time,” it’s easy to relate to Yourself And The Air’s reluctance towards adulthood. But with a sound as soaring, textured and thoughtful as Who’s Who In The Zoo, maybe hitting musical maturity isn’t so bad.