ALBUM REVIEW: “What a Pleasure” by Beach Fossils 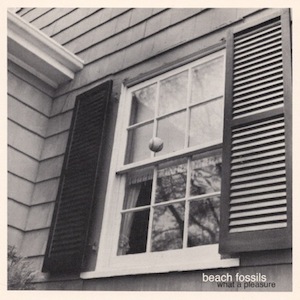 I must confess that the Beach Fossils’ beach pop, psychedelic self-titled debut from last year topped my “best of” list. I like the band to such a degree that when they opened last year for Bear in Heaven at the Rickshaw, I was so satisfied with their set that I immediately left even though I was supposed to be covering the headliner (my editors are still annoyed).

When I heard a few tracks from What a Pleasure, the cleaned up production was a little off putting, but upon multiple spins the album, I found that it felt like a clear progression for the band. The guitar work is gorgeous and feels lusher. The vocals are numb but expressive, and the song writing is solid. There is a certain liquid sound that the band has, and while the debut came out in the warm months of last year and was the perfect beach/ summer record, What a Pleasure’s guitar work splashes and drops like rain, without being cold.

The debut’s tracks moved lazily along and were instantly likable, where as What a Pleasure features “growers.” The album opens and closes with “Moments” which creates symmetry and feels more whole and complete than certain, recent full blown LPs (King of Limbs anyone?). The tracks move with definite energy and purpose; I can’t wait to see what they do next.