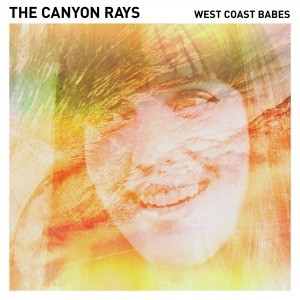 Luke Hamel’s Canyon Rays came to life as a bedroom project with last year’s charming Christmas In California EP. Keeping the California perspective, but adjusting the focus to the universal “Girls! Girls! Girls!,” the full-length debut West Coast Babes is a whip-smart cross of 80’s synth-pop leavened with the classicist’s touch of 60’s guitar jangle that never really seems to go out of style. The production is crisp and clean, and there’s a little more going on here than surface listens would indicate. Like fellow LA band Cayucas, it can be taken as a referendum on the California Dream: did we ever achieve it and, if so, where the hell did it go, and how do we get it back?

Among the walls of harmony, simple pleasures appear, like the guitar line in “To Live And Die In Tivoli, NY” that haunts long after the song is finished. The LP kicks up to another gear with the closing duo of “Karmic Dream Sequence #2” and “Love Disease”, where they depart from the simple song approach to spin a pair of epics. The former is a loping number that takes a turn towards the psychedelic and ends in a hail of bliss. On the closer, they put their own indelible stamp on the power ballad. Currently touring back east, look for them back in their home state in October, and the holiday season should see another Xmas EP to complete the cycle.