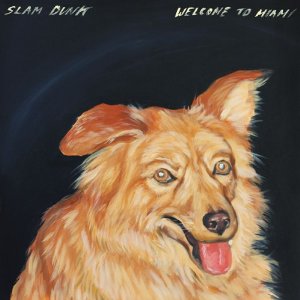 Slam Dunk chose a good city to namecheck in the title of their sophomore album, Welcome To Miami. Though the band may hail from snowy Vancouver, Canada, they’ve crafted an album that is pure heat. The songs simmer with a garage proto-punk force, and when they do boil over, as they often do, they shoot flavors of everything from hot jazz piano to dangerous saxophone. When Slam Dunk does slow things down, they’ll have you holdin’ your baby tight, ‘neath a full moon and the lights of your dad’s Cadillac.

Tracks often flip from one mood to another with nary a moment’s notice, but without being forced or fragmented. The whole album feels very organic, like the songs are crafting themselves from the memories of dusty old amplifiers. That’s a testament that the youngins in Slam Dunk are bringing so much life to these fun, fearless tunes. Welcome to Miami does what a good second album should: it’s not a radical overhaul of their sound, but rather an improvement of what was already great about them. It’s a hair more polished than 2011’s, The Shivers, with themes that venture outside the realm of teenage fun. Welcome To Miami is the older kid down the street who has the cool car and the hip jacket; he’ll steal your girl, but you just won’t be able to stay mad at him.