ALBUM REVIEW: "We Will Never Be Discovered" by The City and Horses 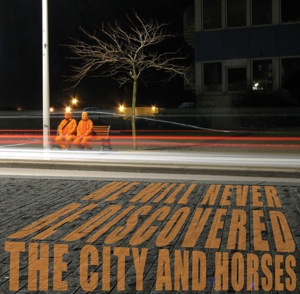 It's always nice to see a band that doesn’t take themselves too seriously. The City and Horses are funny, endearing, and Velvet Underground-esque. Sounding like Lou Reed and Nico may not be the nicest thing I could say about someone, but it’s fitting. The songs are s

implistic, catchy, and fun without being too poppy. I can’t wait until they ruin this album by putting it in some movie where Michael Cera acts like an awkward teenager. There is nothing flashy or especially intrinsic about We Will Never Be Discovered, but on songs like “The Company, Inc.” I found myself bobbing my head and laughing out loud as I, myself, have dipped my pen in the proverbial company ink or inc., as it were, on numerous occasions. Is that too much information? Listen to the album and you’ll feel the same way. It’s the best thing since I've heard Scarlett Johansson's cell phone was hacked.