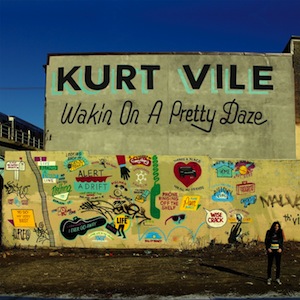 fried. But I don’t mind,” Kurt Vile professes on “Wakin’ On A Pretty Day,”

the first single (and 10-minute-long epic) from his fifth full-length solo effort. This is Vile’s music in a nutshell. One can always count on Kurt Vile to deliver the delirious, acid-drenched, lo-fi folk he’s known for – and this time around is no exception. Wakin’ On A Pretty Daze is as mellowed-out as ever, but covered in a few extra layers of jangly guitar meandering aimlessly through Vile’s ‘pretty daze.’ He may be fried, but it sure works in his favor.

Wakin’ On A Pretty Daze is a seamless transition from Vile’s last success, 2011’s Smoke Ring For My Halo. He takes all the glorious lysergide from previous albums and elongates his carefree guitar ballads into swirling 8-minute odes to laziness and simplicity. “Pure Pain” effortlessly blends this hazy daze with more agitated, rattling tempo changes, and “Air Bud” is both soaring and jagged around the edges. Vile captures a paradox – Wakin’ On A Pretty Daze is both sun-soaked and cloudy; restless and sleepy; precise and unshackled. It’s a solid album that’s stoney as ever, with the potential to become a classic. Standout tracks: “KV Crimes,” “Was All Talk,” and “Never Run Away.”