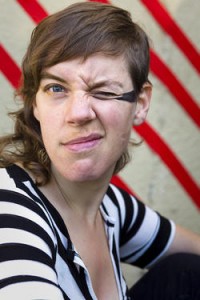 Admission: Being a Berkeley native, I’m a little sick of my own kind. That Girl. The middle/upper middle class boho with a middle hair part and sandals who has little hand-stitched Guatemalan purses from her family vacation to a remote farm, brings plantains with sheep’s yogurt for lunch, and pronounces Mexico “Meh-hee-co.” I fucking hate that girl.

It was easy for me to dismiss tUnE-YaRdS‘ Merrill Garbus with her Smith education, her New England background, her study abroad time in Kenya, the fact that she was into puppet theaterâ€¦not to mention that her name sounds like she’s a member of Martin Luther King, Jr.’s inner circle.

Apology: That said, Ms. Garbus pulls off this sound of hers so well on w h o k i l l, I don’t care if she actually is a vegan or not. Her sophomore album is a kaleidoscope of drums, every sort of percussion, saxophone, ukelele, AND a wild ride on the river of her voice, itself a powerful instrument that can go from meandering stream to roaring waterfall within the span of a bar. She expertly and intricately weaves tribal beats with layers upon layers of her voice, either sampled, modified or natural. The effect should be distracting and scattered, and maybe it would be in hands other than Garbus’. She finds a balance that is riveting, grounded, and expansive.

Perhaps most impressive is the fact that Garbus touches on a range of social issues in her lyrics, but does not let the music override her message or vice versa. “Doorstep” is bright and cheerful, bubbling with doo-wop style vocals over a hip-hop kick step, cheekily in sharp contrast to the lyrics, “Policeman shot my baby as he crossed over my doorstep.” (I’d like to think this is vintage Garbus). “Wooly Wolly Gang” is a dark, slippery lullaby meant for dangerous streets and hot nights before a riot. In “Powa,” Garbus wails about how her boyfriend likes to give it to her doggy style and she doesn’t mind because she’s lost her identity anyway. Then the song gently takes a corner and Garbus coos, Prince-like; at once coy, sad, accepting, and defiant. Amazing. It’s a toss up between the former and the beat-heavy depth charge of a track “Gangsta” as my album favorites.