ALBUM REVIEW: “(together)” by The Antlers 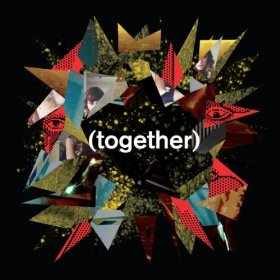 The Antlers
(together)
[Frenchkiss Records]

Earlier this year, the release of The Antlers’ Burst Apart was met with critical acclaim as the Brooklyn-based trio ditched the grandiose concept album approach (as seen on Hospice) and returned to straight-forward slightly sullen songwriting. The Antlers’ forthcoming EP (together) essentially acts as a b-side remix of tracks off Burst Apart rerecorded by the band in collaboration with some of their very talented friends. If you loved seeing The Antlers evolve from Hospice to Burst Apart, then you will definitely love and appreciate how the band pushes itself even further down the evolutionary road venturing between the stripped down and the electronically amped up on (together).

The Burst Apart version of “I Don’t Want Love” is tenderly standoffish and Peter Silberman has a knack for delivering his vocals like an apologetic handwritten note left on the bedside table. Its counterpart on (together) is Silberman’s own solo deconstructed version of the song without the emotional niceties. The echoey undertones of his remixed version infinitely bounce off the walls in the space between your ears. (together) also provides not one, but two, remixed versions of “Parentheses” which provide an interesting opportunity to witness varying incarnations and artistic interpretations of the same piece of work. The first remix by PVT buries Silberman’s wailing falsetto underneath an anxiety causing repetitive electro beat that makes you feel like you are reliving Groundhog Day over and over again. The second version by Bear in Heaven is an epic 18-minute adventure through the gnarled and twisted psychosis of these collaborators. I couldn’t stop thinking about some psychological Darren Aronofsky thriller for the entire 18-minutes. Though six of the eight tracks on (together) are remix collaborations, the remaining two tracks consist of a cover of “VCR” by The Xx and “Tongue Tied,” a song that is entirely constructed in The Antlers’ own image originally appearing as a bonus track on Burst Apart.