ALBUM REVIEW: “The Golden Age of Nowhere” by Funeral Party 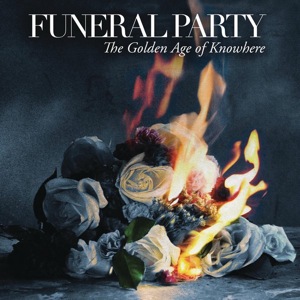 When I die, I don’t want some depressing mourn-fest gathering. Sure, the world will be devastated by my departure, but I want people to get together and revel at how rad my life was and all the cool shit I accomplished. I want a party, damnit! (That, and my ashes being shot into space on a rocket, but I digress.) I’ve been speaking of my funeral party for a while, so imagine my delight when I stumbled across a band that goes by just that, Funeral Party and their first studio album, The Golden Age of Nowhere.

Judging by name alone, you might expect some sort of cross between emo down-the-road-not-across-the-street meets metal mayhem, but you’d be wrong. Instead, this quartet from LA cranks out the tuneage that I want playing at my funeral. Upbeat, straight-up indie punk. Raw, fast, complex, but most of all, fun. Funeral Party’s latest is truly something awesome. The first track, “Car Wars” concludes in a killer ailing distortion-induced guitar solo, while “Finale” has some crazy recurring drum beat that creates a somewhat organized chaos type sound. They manage to nail diversity too with chill tracks like “Postcards Of Persuasion” and “Relics To Ruins,” which complete the album into one cohesive unit. These guys friggen rock, and I’d love to have their jams cranked at my funeral party.