“Take The Ride” by Y LUV 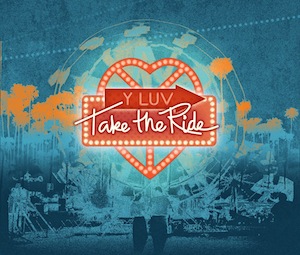 Y LUV’s new EP Take The Ride finds the group coming up with a plan for world domination, cribbing a few moves from U2, The Killers, and Bruce Springsteen, among other pop-rock giants. It’s universal pop music, something fans of Phoenix and Passion Pit will find much to love in. It’s not so much music for the head as it is of the heart (and of the hips).

The LA foursome’s sound is synthy and drenched in their home city’s glitz: from piano lead-ins to soaring guitar solos to hooky keyboard lines, these guys are absolute hedonists, in the best possible way. Picture the soundtrack to a John Hughes movie with a lot more hangovers and regret and you’re halfway there. Lead single “All I Wanna Do” is sure to soundtrack a lifechanging moment for a drunken partygoer at some point in 2013. For real, you’d have to be a Nazi dentist in order to not glean a pleasure center being hit by the track’s romantic urgency and the Slash-ing solo (that comes out of nowhere, and yet fits right in).

These guys know what they’re doing (they wouldn’t be doing a DJ set at this upcoming Bonnaroo and a slot at Glastonbury if they didn’t) and this album most definitely is a promising taste of more Ecstasy-fueled comedowns to come.