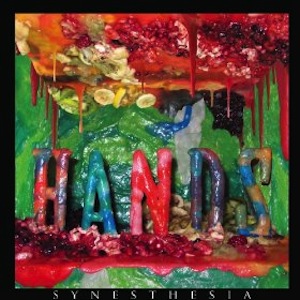 Imagine a world of music shifting seamlessly through genre after genre, where even the most staid indie music fans can’t help but bounce feverishly on the balls of their feet. This is the realm
of Hands, the Philly-Los Angeles quartet who bring an April shower of awesome tunes down on our heads. Their debut album, Synesthesia, stimulates the senses with soaring vocals and sharp musicians blending their talents through catchy loops of electronica.

Geoff Halliday’s impressive vocal range complements his frenetic keyboarding in “House of Jars” and “Trouble,” while the impossibly catchy “The Game Is Changing Us” showcases Ryan Sweeny’s guitar work. Add in Sean Hess and Alex Staniloff on drum and bass, and Hands becomes an unstoppable force of danceable indie rock. Hands can also tug at the heartstrings, as we experienced in their standout track, “Brave

Motion.” It captures that reeling sensation when you spy the one that got away step into the arms of another. The quiet burn of “It makes no sense” to the howl of “If I know you, you’d run…” is a dagger through the heart. Since the release of their Massive Context EP in 2012, Hands continue to take their multifaceted sound and infuse it through the listener with unbridled enthusiasm.