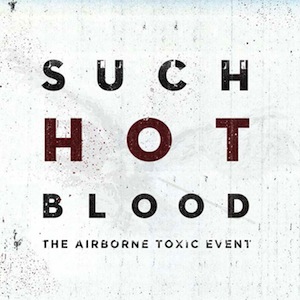 The Airborne Toxic Event begins their third studio album Such Hot Blood in the same way they became recognizable: a second-person perspective of the protagonist agonizing over his lost love in the middle of a dance — to the tune of epic guitars and strings galore. While attempting to relive their “Sometime Around Midnight” success, however, the post-punk band sometimes forgets the songwriting skills that made that song a hit.

“The Secret” would have been an excellent

beginner had they not already written it in their debut, but “Timeless” is a trend downward, the sort of heartless radio-ready rock anthem with a nauseating chorus like “We are / we are / we are timeless / timeless.” Other tunes, like the more acoustic-guitar-centric “The Storm” and the violin-touting “Safe,” give hope that TATE is not stuck in a musical formula, with “This Is London” coming off as the strongest tune next to the lovingly composed duet, “The Fifth Day.”

“True Love” and “Bride and Groom” are attempts at mimicking Bruce Springsteen, and they actually work better than mimicking themselves. Horns are a lovely touch here, and the piano plunks are light but effective. Disappointingly, the writing regularly doesn’t impress, let alone reach the level of Springsteen; lyrical repetition is their backfiring weapon. TATE excels at imagery, but when they try

for poignancy, they fall flat.