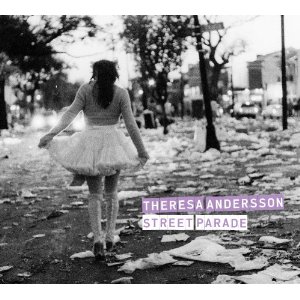 Every February, people from all over the world descend on Bourbon Street in New Orleans to get a taste of the legendary Mardi Gras parade, but on April 24th, you can find the secret passageway to the festival’s sinister delights year-round in Theresa Andersson’s album, Street Parade. Inspired by the parade’s hangover aftermath of broken beads, tarnished masks, and mountains of trash, the New Orleans native’s daring new album captures the soul of her hometown in all of its grit and glory, and gives it a new, electric heart.

Andersson experiments with electronic beats and the faint sound of haunting organs over angelic harps, rumbling pianos, and bursts of brass for a sound that is as sweet as it is rich and dark. With a voice that conjures the choral chops of Tori Amos and the power belting of Florence and the Machine, we see goosebumps in store for the future fans of Theresa Andersson, and that’s no Louisiana voodoo, just a prediction based on our own possession.

Catch Andersson on her national tour made up mostly of small clubs this summer, and get the opportunity to see this artist before she’s selling out stadiums and amphitheaters.