“Songs Out Here” by That Ghost 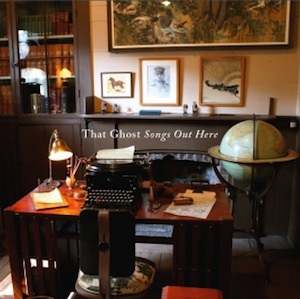 Band names are usually ambiguous strings of nouns and verbs that the lead singer saw in a drug-induced dream that he claims was a vision from God, but in the case of That Ghost, the band name couldn’t be more descriptive of the sound. Especially on his latest, Songs Out Here, That Ghost uses lo-fi heavy distortion and reverb effects for a sound that’s just as supernatural as the name.

Ryan Schmale handles all of the instrumental duties himself, which makes this NorCal native’s sound even more interesting. Tracks like “To Like You” and “An Only Son” have a decidedly west-coast vibe with an undistorted electric guitar almost like a 50’s era rock n’ roller playing from beyond the grave. Other tracks, such as “Pale Child,” ditch the electric for an acoustic making something you might expect to hear wafting in between waves as you contemplate under the moonlight on a west coast beach. In all, That Ghost crafts a unique sound that’s worth a spin, if you’re in the mood for something a bit different.