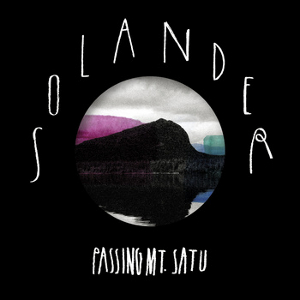 I put this band on my iPod with the intention of reviewing it. But after awhile, I had listened to this album at least two dozen times simply because I couldn’t stop. I listened to it while getting ready in the morning, driving to work, and writing papers. The sweet sound of Swedish pop/indie folk trio Solander was a calming soundtrack to daily life. Their new album Passing Mt. Satu is a mixture of the upbeat quality of indie rock, the ethereal vocals of dream pop, and the earthy undertones reminiscent of folk.

“Porch Sitting Song,” the first track on the album is perfect for just that. Nearly all of the tracks are perfect for porch sitting, or cloud floating, or daydreaming, or exploring a nearby forest. The group has an elegant way of describing normal things, such as the dissolving of a relationship. In “Generations Lost” they sing, “If you don’t come up with a better answer than the last one, I’ll be sailing off.”

Their use of strings adds a unique element to a strong acoustic guitar sound. Sudden appearances of electric guitar create fun surprises throughout the album. My personal favorite, “The Garden” is a track with a pulsating drum beat and an intermittent presence of vibrating string sounds. This band has been around since 2005 and is planning an upcoming North American tour. It’s about time we start enjoying their awesomeness.