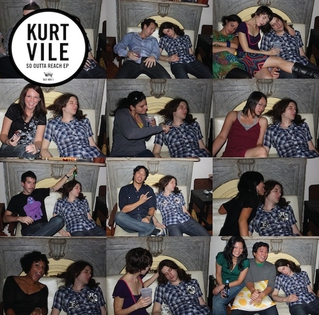 Kurt Vile’s acoustic guitar strumming hits me like Steve Martin’s character in “The Jerk” when he hears Orchestra music for the first time. Navin Johnson becomes overwhelmed and finds rhythm, snapping his hands on beat, yelling out “This music speaks to me,” as his African-American family sleeps in the next room. Although not as rhythmically challenged as Navin, Vile’s music moves me. His simple, straight forward blues-rock has a certain apathetic cool Americana quality that feels incredibly honest.

Vile was recently taken to task by Titus Andronicus for selling “Baby’s Arms” to Bank of America for a commercial. Vile’s response: “Sorry Titus. I did it to be like The Carpenters. And to buy my daughter high end diapers. And to pay back my publishing advance. And because I never cared about that sorta thing. Whoops, I even have a Bank of America account. B-P (And that’s a dude with sunglasses sticking out his tongue.) I’m so sorry.” Artistic integrity is nice, but paying for diapers and re-paying debt is some real world shit.

If you don’t have Smoke Ring For My Halo, get it now. It’s an amazing record with so many great songs, including “Baby’s Arms,” and the title track. Vile’s mastery of the guitar is special to hear, and he’s a fine song writer as well. Ironically “Puppet to the Man” seems like a pre-written argument against the “sell out” criticism that would come later. “Runner Ups” deals with losing friends and being ok with time moving on and the natural decay it can have on relationships “my best friend’s long gone, but I’ve got runner ups. Yeah.”

The EP is a worthwhile complement to the LP and gets into more material from the Smoke Ring sessions. “Creature” starts the album, and has the same perfect movement and flow of his past songs. “Downbound Train” is a grimy cover of the Bruce Springsteen classic, and “It’s All Right” sounds more expansive than anything on Smoke Ring, possibly signaling where Vile could go from here.