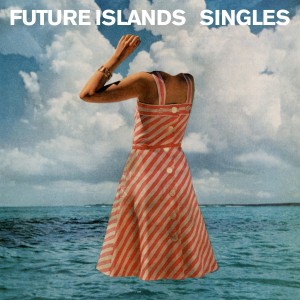 Baltimore-based synth-pop band, Future Islands, captivated a national audience with their much-talked about appearance on the Late Show With David Letterman. Their latest album Singles justifies why the attention is warranted.

The production allows ample room to a sparse and airy arrangement. Gerrit Welmers’ synths float and provide comfort that alleviates tension. He also creates some of the catchiest melodies – from playful (“Spirit”) to spacey (“Seasons”). Bringing in a drummer, Denny Bowen, carries the rhythmic weight off of bassist William Cashion’s shoulders. His riffs pulsate louder (“A Dream of You and Me,” “Doves”), flowing freely without a drum machine to restrict it.

Dramatic frontman Samuel Herring is as emotional and visceral as ever. Possessing a distinct and unique baritone, he goes from hushed whispers (“Light House”) to gravelly growls (“Fall from Grace”) in a Jekyll-and-Hyde-like manner, but with impressive and uncanny control. It also brings to life his poetic lyricism which blossom with vivid imagery that uses nature as a metaphor to explore human relationships.

During an interview, Herring stated the title Singles stems from the idea that each song stands out on its own. He’s definitely correct, and holistically, it’s their most gorgeous and accomplished album to date.