“Rituals” by Other Lives 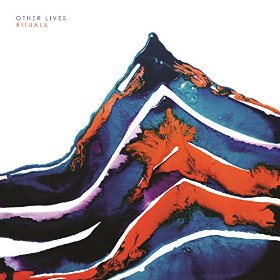 Two years ago, Other Lives left their hometown of Stillwater, Oklahoma for the riverside greenery of Portland. The band’s third full-length effort, titled Rituals, finds Other Lives in a new place – not just geographically – downsizing from a five-piece to a three-piece band and collaborating with Atoms for Peace‘s Joey Waronker as co-producer. It can be difficult for a listener to contextually understand an album where the band’s catalog has matured over time – is what we’re listening to now representative of the band’s sound or is it a one-off deviation from the norm?

For Other Lives, Rituals is a natural progression in the band’s life cycle, from their self-titled debut to the immensely successful Tamer Animals, it reflects where they’ve been but also who they are now. Albums from Other Lives are not the ones you click on to get a party started, nay, pensive quiet times of solitude call for moments tracked to this band. The heart of the Other Lives’ orchestral aesthetic is beautifully carried forward in Rituals and Jesse Tabish’s vocals are as ghostly and monotonic as ever garnering even more comparisons to pal Thom Yorke than ever before (“Untitled” and “Pattern”).

Newer to the mix is an edgier feel that begins developing from “Reconfiguration” forward, especially in the aptly named “Beat Primal.” Rhythmically, Rituals feels fresh. Whether that’s consciously done or not, it rounds out and grounds Other Lives’ grand sound that continues to soar high on their third full-length effort.