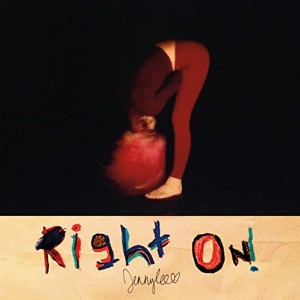 When comparing jennylee to her other project Warpaint, the words “discontinuation syndrome” come to mind. Where the latter group feels bleak and moody in their sound, California’s jennylee is moreso the sound of one coming off their antidepressants after a day. It’s an unpleasant feeling for the artist, having her mental pleasantries interrupted – making this figurative interruption fuel for right on! Warpaint has the power in them to commit to screams, but Jenny Lee Lindberg actually goes for the bite, like a cannibal.

Tracks like “boom boom” and “bully” feature strings in hot pursuit of its target. Where the former feels anxiety in society the latter, unfortunately, doesn’t use a vile tone to coordinate with its rough subject matter. “riot” also suffers from this incoordination, but makes up for it with a cultish, psychedelic vibe. “never,” with its near-chilled out new wave vibe, centers around the world that jennylee finds crushing, seeking out solace from mobster-like men in the gentler “he fresh.” “offerings” and “white devil” are highlights that scream at listeners with an obsessive fervour.

Bass and anxiety are the heart of jennylee’s beast. This sonic monstrosity is still hungry for flesh. Good on her.