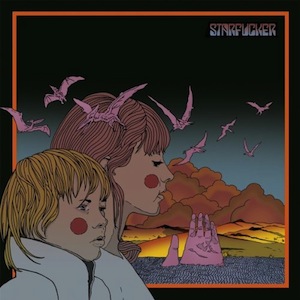 Portland, Oregon’s Starfucker may have to fuck themselves after their third full-length entitled Reptilians drops March 8th on Polyvinyl. I say this because this album could very well elevate them into the upper echelon of today’s indie “stars.”Â Reptilians is a departure from 2009’s Jupiter in that it uses more traditional rock instrumentation to create their electro-disco carnival. Make no mistake, this record is built for the dance floor. Produced by Jacob Portrait (Mint Chicks, The Dandy Warhols) at the Dandy Warhols’ studio, the Odditorium, finds Joshua Hodges (vocals, keyboards, guitar, drums), Ryan Biornstad (guitar, keyboard, vocals, turntables), Shawn Glassford (bass, keyboards, drums), and Keil Corcoran (drums, keyboards, vocals) creating a record that will not only make you want to dance, but also make you listen to what you’re dancing to. Standout tracks like “Mona Vegas” have a great groove with a subdued grace. “Millions” is more reminiscent of previous STRFKR jams, but not as “spazzy” as past efforts. “Quality Time” drives to a house beat with some nice melodic builds, while “Julius,” the first single off Reptilians, has more of a straight-ahead dance-pop feel. I just don’t remember STRFKR sounding this much like a band with instruments and not people with laptops. This is a really strong effort from tops to tails! I hear bits of the less grating aspects of Crystal Castles copulating with MGMT. Front man Josh Hodges wrote most of the album, described as “happy music about death.” A literary metaphor for orgasm is “the little death” and Starfucker has created an album worthy of a “little death.”