“Parts and Labor” by Letitia VanSant & The Bonafides 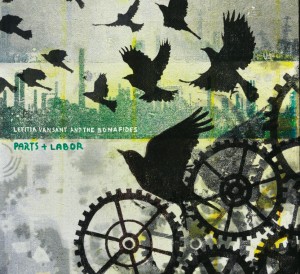 Letitia VanSant & The Bonafides‘s folk-rock opus on the economy and workforce, Parts and Labor, was inspired by an act of extraordinary kindness. After the band played a show in southern Baltimore, Letitia’s housemate had dropped his commercial license and a homeless man named Jimmy, a former commercial driver sweeping the floors of a 7-11, found it and walked early in the morning to VanSant’s home 8 miles away, asking directions as he went, to return the license in person, because he knew that being without it for even a day could ruin someone’s life.

In seeking a way to tell Jimmy’s story more completely, VanSant spent more than a year gathering stories about working from all rungs of society (laborers, office workers, business owners, artists, even the unemployed), transforming them via the intense introspection she showcased on her July 2012 album Breakfast Truce. The result is a modern story of work and the economy told through ten profound – but personal – songs.

VanSant’s ability to join the individual to the universal is most evident on the album’s centerpiece, “Rising Tide,” where a story about her father’s fight against cancer (likely caused by exposure to Agent Orange) ends with an – let’s call it an “invitation” to understand the role we all play in affecting others’ lives to earn a living, even if we’re not doing something as horrible as creating Agent Orange or manufacturing cigarettes:

Other highlights on the album include the title track, directly inspired by Jimmy’s story recounted above; the bluegrass tune “Go Darling”; and especially “When I Was Your Age,” where Letitia sings a heartbreaking waltz to her imagined grandchildren about what the world was like before global warming destroys our natural habitat.